But how exactly do the stripes accomplish that? Now scientists can eliminate one theory, according to a new study published Tuesday in the Proceedings of the Royal Society journal.
Researchers looked at the nature of the disorientation effect in flies, and ruled out the hypothesis that a common optical illusion known as “aperture effect” has a role in dazzling them.
“Not only do these exciting studies bring us closer to understanding one of the world’s most iconic and photogenic species, they will be of great interest to farmers attempting to reduce the damage caused by fly bites and even general horse-wear companies,” said Tim Caro, a senior co-author of the study and a professor at the University of Bristol’s School of Biological Sciences, in a release.

Stripes, checkers and the aperture effect

Caro and his colleague Martin How, a Bristol research fellow, have put zebra-print coats on domestic horses for their research, a good alternative to studying zebras in the wild.
Tabanid horseflies couldn’t slow down to land on horses wearing the striped coats, previous studies revealed, and would at times fly past the masquerading animals or bump into them rather than landing.
This time, the researchers observed the fly behavior around horses wearing gray coats, striped coats and checkered coats, learning that flies “avoided landing on, flew faster near, and did not approach as close to striped and checked rugs” compared to gray, according to the study.
Scientists considered whether the aperture effect — the optical illusion that tricks us into seeing the stripes on a barber shop pole as moving upward rather than simply rotating — was a factor in the disorientation experienced by the flies.
“Our findings show that this effect is not operating – based on flies’ behavior around patterned coats – because if it was, flies should land on checks but not stripes. Checks cannot replicate the barber pole effect in a fly’s eye or brain,” Caro told CNN.
“It must be something else,” he said. 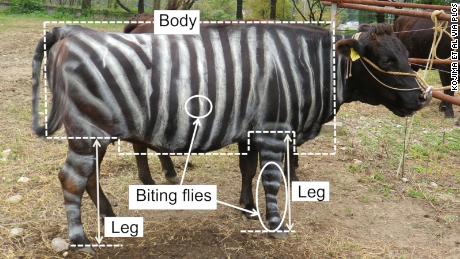 The performance of checkered coats was unexpected.
“This suggested that there is nothing special about stripes per se in preventing horse flies from landing, but it must be the sharp contrast between different elements on the coat,” Caro told CNN.
Future research will focus on which coat patterns are most effective, and on better understanding the role of pattern size and contrast in deterring flies.

Evolution and protection from flies

Protection from horseflies is currently the most accredited hypothesis as to why zebras have stripes.
“Horseflies in Africa carry diseases that are lethal to members of the horse family – the equidae. The pressures on not being bitten by these flies are therefore very strong,” Caro explained.
“Evolution will fine tune the coat patterning to what is most effective in stopping flies landing – given developmental constraints of how patterns develop in utero. Our research and that of colleagues show that stripes do this job very well,” Caro added.
The fact that zebras swish their tails almost continuously and have an odor that is also repellent to flies supports the view that these animals are especially impacted by flies, Caro argued.
“Very few mammals have evolved sharp repetitive stripes suggesting that zebras suffer particularly acutely from horse flies and the diseases they carry,” he told CNN.

Horseflies in the US

Domestic horses also suffer from horsefly bites, and Sonja Swiger, associate professor in the department of entomology at Texas A&M University, said that “the consequences are pretty severe.”
Tabanid horseflies have a different anatomy compared to other blood-sucking insects like mosquitoes, which have needle-like mouths that can penetrate the skin.
“They have very large serrating mouth parts. They have to cut a hole in the skin in order to get the blood to start to flow, then they drink it,” Swiger explained.
The “messy feeding habit” of tabanids causes pain and discomfort to animals like horses and cattle, and exposes them to the transmission of diseases, including equine infectious anemia.

Horseflies are present across the United States, but are more prevalent in warmer climates, Swiger said. Southern states can have two generations of horseflies each year, whereas in Northern areas there will usually be just one, she explained.
Containing horseflies is “almost impossible,” according to Swiger.
Chemical pesticides aren’t helpful since the flies typically bite once a day, not leaving the pesticides enough time to be effective. A blanket or coat is an effective tool, and for that reason, the Bristol scientists’ study is exciting and promising, Swiger argued.
Do horseflies bite humans? While we’re not their first choice, they do, Swiger said. On your next day on the farm or horseback riding excursion, it’s possible you might want to consider wearing striped or checkered patterns yourself. You’ll be stylish, and potentially bite-free.