A concert at a water park in Wuhan, China, has shocked the world as photos and videos emerge of a music festival held over the weekend in which a staggering number of people can be seen partying without social distancing or masks, three months out from the city’s most recent officially reported local infections. 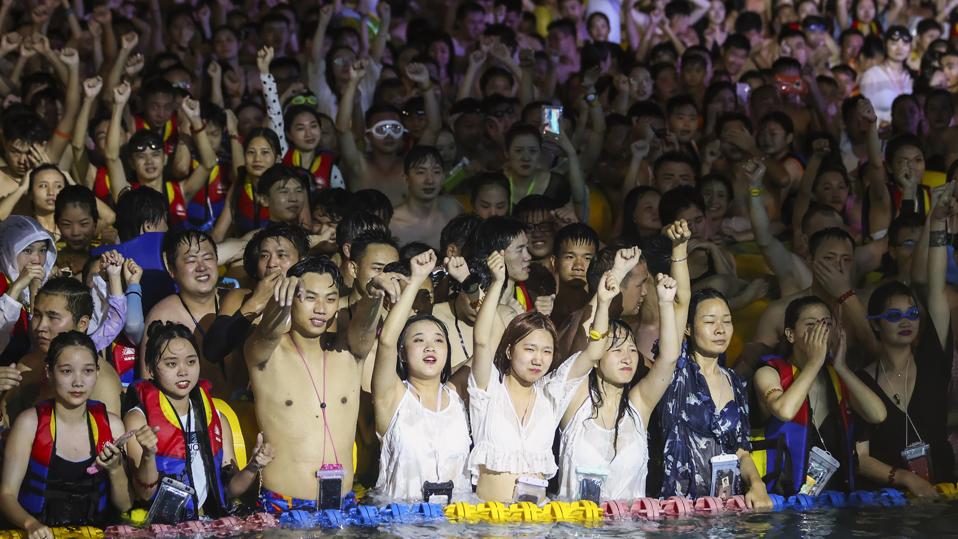 This photo, taken Saturday, shows people watching a performance at a water park in Wuhan in China’s … [+] central Hubei Province.

While much of the world remains in quarantine and practices social distancing out of fear of spreading the coronavirus, Wuhan, where the pandemic is believed to have originated, hosted a music festival, photos from which have gone viral online as people in other countries gawk at the crowd size and how close attendees were packed together.

According to AFP, the scenes are from a concert for a music festival held at Wuhan Maya Beach Water Park, which began reopening in June after Wuhan’s nearly three-month long lockdown was slowly scaled back.

Local media sources cited by AFP reported that the park is only allowing half of the usual number of visitors, but no face masks can be seen in photos or videos taken during the concert, and there appeared to be no social distancing.

According to the BBC, some Chinese social media users were shocked Wuhan permitted such a large event.

Thousands reportedly crowded into a pool for an electronic music concert in Wuhan Saturday.

Wuhan, China, where the first cases of coronavirus were detected, was once the epicenter of the pandemic that has so far infected nearly 22 million worldwide, according to Johns Hopkins University. Wuhan has reportedly not detected any locally transmitted coronavirus cases in three months. It has been largely attributed to a strict 76-day lockdown on the city, but others have questioned the validity of official Chinese reports on the number of cases and deaths caused by the virus.

There appeared to be no social distancing during the festival, going by photos and videos taken at … [+] the event Saturday.