What the immune response to COVID-19 says about the prospects for a vaccine – Nature.com

Search for this author in: 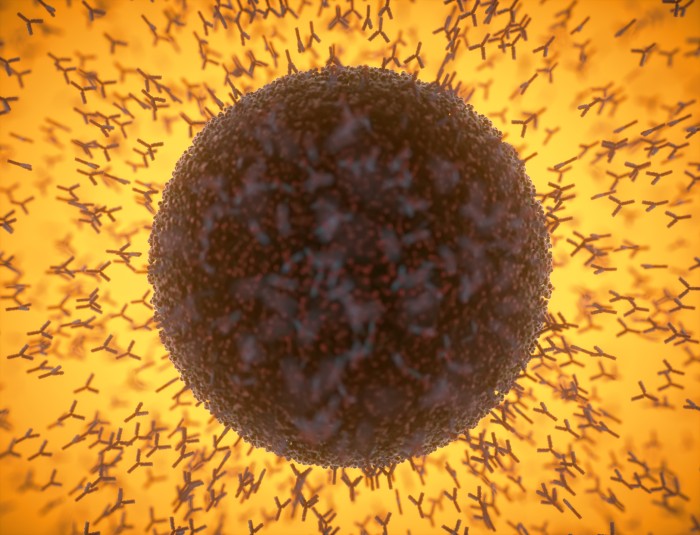 Immunologists are on the hunt for the antibodies (and B cells and T cells) that help to kill SARS-CoV-2 in the body. Credit: KTDesign/SPL

In the late 1980s, 15 healthy people moved into new apartments in Salisbury, UK. On their third day, each was asked to snort a nostrilful of solution containing a coronavirus — one of several viruses that causes the common cold. Then the volunteers spent three weeks quarantined at the Common Cold Unit, part of the Medical Research Council, where researchers monitored a range of symptoms. Some study participants likened stays at the Common Cold Unit to a vacation — if so, it was a holiday complete with blood draws and nasal washes.

About a year later, 14 of the volunteers came back to do it again. This time, researchers were keen to know if the participants’ exposure to the virus had made them immune. The answer: sort of. Although they showed no symptoms, analyses revealed that nearly all of them became infected before their immune systems could launch an effective defence1.

It was an early hint to the answer for a question that now keeps researchers, physicians and politicians alike awake at night: can the human immune system mount a lasting defence against the pandemic virus SARS-CoV-2? The answer is crucial to understanding whether a vaccine will provide adequate protection, whether those who have recovered from COVID-19 can return to pre-pandemic behaviours, and how readily the world can reduce the threat posed by the disease.

Researchers have been rummaging through results from the Common Cold Study and others like it, while scrambling to understand the human immune response to SARS-CoV-2 using animals and cell cultures, along with the latest molecular techniques. They have catalogued antibody and immune-cell responses with uncommon speed, determined which are likely to be the most effective, and designed vaccines and therapies that, in animal studies and small human studies, provoke at least short-term immune responses. But there is no quick and simple experiment that can firmly determine whether immunity will be effective or lasting. It is just too soon to know.

“Only the future can tell us,” says Reinhold Förster, an immunologist at the Hannover Medical School in Germany.

Sporadic accounts of reinfection — people recovering from COVID-19, only to fall ill and test positive for the disease again — have stoked fears that immunity might be short-lived. Media outlets have latched on to such reports, and have offered gloomy predictions about the prospects for a vaccine. But scientists are more circumspect.

“We’re all hearing anecdotes, but I don’t know if any of us know what to think about them,” says John Wherry, an immunologist at the University of Pennsylvania in Philadelphia. So far, reports of reinfection have lacked sufficient information about the person’s immune responses to rule out other possibilities, he says.

For the scientists digging deeply into the details of the immune response to SARS-CoV-2, the data are so far unsurprising — and that bodes well. “We’re seeing great immune responses and fantastic-looking antibodies. We just don’t know the longevity of that response yet,” says Mehul Suthar, a viral immunologist at Emory University in Atlanta, Georgia. “Unfortunately, that will take time.”

The immune system has myriad ways to fend off viral invaders and keep them from returning. It selects for the B cells that produce antibodies capable of binding to the virus. It also squirrels away a store of long-lived memory B cells that produce those antibodies and that jump into action if the virus comes back. Another defence enlists T cells, which patrol the body seeking out and destroying infected cells, to disrupt the virus’s ability to replicate. These immune cells can also endure for years.

Long-term immunity can vary by type and also by degree of response. Vaccine developers often hope to elicit what’s known as sterilizing immunity, a response, typically mediated by antibodies, that can rapidly prevent a returning virus from gaining ground in the body. But not all vaccines or infections elicit the neutralizing antibodies required for sterilizing immunity. HIV, for example, rarely induces neutralizing antibodies2, a fact that has complicated efforts to develop vaccines against it.

The signs so far for SARS-CoV2 are encouraging. Several teams of researchers were quick to isolate neutralizing antibodies from people infected with the virus3; most could mount such an antibody response within days of testing positive. And several vaccine candidates against SARS-CoV-2 provoke a strong antibody response, a positive sign that the vaccines might generate immunity.

But some scientists have caveats about the preliminary data. Antibody responses tended to be highest in people with the most severe infection. Those with mild infections — which is to say most people who have had COVID-19 — sometimes produced small amounts of neutralizing antibody. This pattern is often seen with viruses: the longer, more severe infections are more likely to produce strong, durable responses. This is one reason that common-cold coronaviruses sometimes don’t yield long-lasting immunity, says Shane Crotty, a virologist at the La Jolla Institute for Immunology in California. Antibody levels surge shortly after a coronavirus infection, but then wane. That might not be a bad thing.Credit: Alessandro Grassani/NYT/Redux/eyevine

Then there’s the question of how long antibodies last. When researchers tracked COVID-19 patients over time, they found that the amount of antibody peaked in the days following the onset of symptoms, then began to decline. In some study participants, the antibodies were practically undetectable within about three months4,5. Several major media outlets reported this as a loss of immunity, saying that it would complicate vaccine efforts.

Many immunologists found that declaration a bit premature, however. The data showed a perfectly normal response to a viral infection, says Luis Barreiro at the University of Chicago in Illinois, who studies the evolution of immune responses to pathogens. When a virus attacks, it spurs the proliferation of B cells that produce antibodies capable of recognizing pieces of the virus. But once the infection is gone, antibody levels typically wane. “There is a lot of fear out there,” says Miles Carroll, an infectious-disease specialist with Public Health England in Porton Down, UK. “But I think, on the whole, that it’s a fairly robust immune response.”

To determine how significant that waning could be, researchers still need to know how much antibody it takes to successfully fend off SARS-CoV-2. “Even small amounts of antibodies can potentially still be protective,” says Mala Maini, a viral immunologist at University College London.

They also need to track antibody levels for longer, to find out whether they eventually hold at a low concentration — as is common in viral infections — or continue to rapidly decline. Given these unknowns, virologist Katie Doores of King’s College London, lead author on one of the antibody studies, says that the negative press coverage of her work caught her off guard. “Everyone seems to have gone ‘Argh!’,” she says. “But we don’t know what level of antibodies are needed for protection.”

Plans B and T

Even if antibody levels dip to vanishingly low levels, the immune system often has a backup plan. Memory B cells linger in the bone marrow until a virus returns, when they take on a new identity as antibody-producing plasma cells. The data on memory B cells’ role in fending off COVID-19 is incomplete — they are more difficult to locate and count than antibodies — but thus far, the evidence suggests that they proliferate, says Marcus Buggert, an immunologist at the Karolinska Institute in Stockholm. One recent study, which has not yet been peer reviewed, found memory B cells capable of producing neutralizing antibodies that recognize SARS-CoV-2 in people who had recovered from mild COVID-199.

Furthermore, immunity does not rely entirely on antibodies. T cells might be able to recognize virally infected cells and destroy them, limiting the virus’s spread in the body. Like memory B cells, T cells are more complicated to probe than antibodies, but studies so far suggest that they are called into action during SARS-CoV-2 infection. One recent study surveyed immune responses in 36 people recovering from COVID-19, and found T cells that recognize the coronavirus in all of them6. “It looks like a virus that’s very stimulatory to T cells,” says immunologist Danny Altmann at Imperial College London. “Most people have very good T-cell responses to it.”

T-cell studies are also converging on the possibility of cross-reactivity, in which T cells that recognize other coronaviruses also recognize SARS-CoV-2. Several studies7 have found T cells that react to SARS-CoV-2 in blood samples from people who had not been exposed to the virus. And one team recently reported that some of these T cells react not only to SARS-CoV-2, but also to some common-cold coronaviruses8. The results suggest that there may be some lasting cross-immunity between these cold coronaviruses and SARS-CoV-2, leading to speculation that this could be responsible, in part, for the wild differences in severity of COVID-19 symptoms between individuals.

Lessons learned from other viruses also give reasons to be optimistic that immunity to SARS-CoV-2 will be lasting. T cells against the virus responsible for severe acute respiratory syndrome (SARS) have been found 17 years after infection6. Also, SARS-CoV-2 does not appear to mutate as rapidly as the influenza viruses, notes Barreiro, which change so frequently that fresh vaccination is needed each year.

The Common Cold Unit study found little sign of hope for sterilizing immunity for its common-cold coronavirus, but the results also suggested that immunity could be strong enough to reduce or even eliminate symptoms. Sterilizing immunity for COVID-19 would be ideal, because it would reduce the risk of people with minimal symptoms spreading the infection widely. But at this point, a vaccine that could reduce mortality would likely still be helpful, says Alessandro Sette, an immunologist also at the La Jolla Institute for Immunology.

Altogether, the diverse and sometimes devastating effects of SARS-CoV-2 on the body and its ease of spread have made it an unusual foe. But the immune system’s response to the virus, so far, has held few surprises, says Barreiro. In this case, he adds, ‘boring’ bodes well for long-lasting immunity. “There are still a lot of things that we don’t know, but so far, there’s nothing really unique.”

An essential round-up of science news, opinion and analysis, delivered to your inbox every weekday.