Sen. L. Louise Lucas, who is also president pro tempore of the Virginia state senate, has been charged with conspiracy to commit a felony and injury to a monument in excess of $1,000. Charges were also filed against a Portsmouth school board member, local NAACP chapter members and three public defenders. 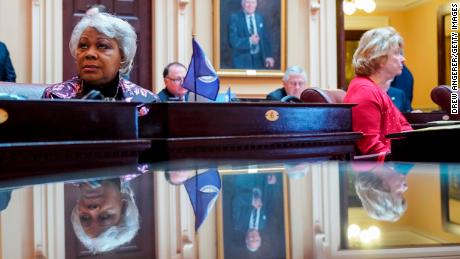 Neither Lucas, Portsmouth Mayor John L. Rowe Jr., nor a spokesperson for the Portsmouth Public Schools could be immediately reached for comment.
Greene requested the individuals charged voluntarily turn themselves into custody.
“During this time of our nation’s unrest, which was a direct result of the heinous death of Mr. George Floyd, countless monuments across our nation were being defaced by protestors,” Greene said. “Many of those localities investigated the acts of destruction and subsequently charged the responsible parties well after the incidents were over,” Greene said, adding that the Portsmouth incident was the only one nationwide that resulted in a man being gravely injured.

The injured man, Chris Green, suffered life-threatening injuries during protests that took place in the aftermath of Floyd’s killing. A direct result of Floyd’s death was renewed interest in wanting Confederate monuments and flags taken down. The effort to remove the Portsmouth monument — built in 1876 — “resulted in hundreds of thousands of dollars of damage,” Greene said.
Virginia State Police finished their investigation into the incident on July 22. The Portsmouth Police Department then conducted its investigation into the June 10 demonstrations, Greene said.
“A team of detectives and supervisors” compiled written, video, and audio evidence surrounding the destruction of the confederate monument, Greene said.
Requests were also made for additional state and federal assistance for an independent investigation into the incident, but Greene said that the requests “fell outside of the scope of investigation for those law enforcement entities.”
Additionally, a discussion with the Portsmouth commonwealth attorney for a special grand jury and special prosecutor “did not yield any action,” Greene said.

Lucas has been a member of the state senate since 1992, her biography says. She became the first Black woman to serve as president pro tempore of the state senate, according to the Virginia Senate Democrats Facebook page.
The Virginia Legislative Black Caucus along with other Virginia Democrats condemned the charges brought against Lucas.
“It’s deeply troubling that on the verge of Virginia passing long-overdue police reform, the first Black woman to serve as our Senate Pro Tempore is suddenly facing highly unusual charges,” Gov. Ralph Northam tweeted Monday.
Former Gov. Terry McAuliffe also tweeted in support of Lucas Monday, saying she is “a trailblazing public servant who isn’t afraid to do and say what she believes is right.”
“Her opposition to a racist monument is the definition of what John Lewis called ‘good trouble’. I stand with my good friend,” he said.
Republican Party of Virginia Chairman Rich Anderson said the senator should turn herself in.
“Felony charges leveled against a sitting state senator are to be taken seriously, and should not be sought out for political gain,” he said in a statement to CNN affiliate WAVY-TV. “It is for that reason that the Republican Party of Virginia calls for Senator Lucas to turn herself in. Immediately.”