In the past week, the Covid-19 positivity rate among students rose to 13.6% of the 954 students tested, and five employees also tested positive, according to the university’s Covid-19 dashboard. As of Monday morning, 177 students were in isolation and 349 were in quarantine, both on and off campus.
Most students with Covid-19 have demonstrated mild symptoms, Chancellor Kevin M. Guskiewicz and Executive Vice Chancellor and Provost Robert A. Blouin said in a letter to the community.
Effective Wednesday, all undergraduate in-person instruction will shift to remote learning, they write. The university also expects the majority of undergraduate residential students to change their residential plans for the fall. 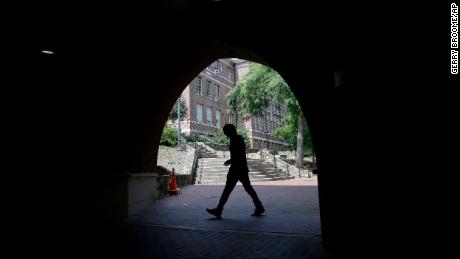 “As much as we believe we have worked diligently to help create a healthy and safe campus living and learning environment, we believe the current data presents an untenable situation,” Guskiewicz and Blouin said.
The stunning rise in cases, just a week after classes began, illustrate the speed of Covid-19 and the difficulties of bringing young people into proximity during the pandemic, even as students begin their return to college campuses.
On Sunday, UNC announced a fourth cluster of Covid-19 cases on campus, defined as five or more cases in proximity. Two clusters were identified at residence halls, one as at a private apartment complex that houses some students, and another was among members of a fraternity.
Oklahoma State University also reported clusters of new cases among students this weekend, and social media videos at a University of North Georgia off-campus housing complex showed a massive party with few wearing masks.
“We are disappointed that many of our students chose to ignore Covid-19 public health guidance by congregating in a large group without social distancing or face coverings,” Sylvia Carson, UNG’s executive director of communications, told CNN in an email.

The spread of the virus can be limited if people follow public health guidelines like social distancing, mask-wearing and hand-washing. But getting people to follow that advice has proven to be tricky — particularly so for college-aged students, who led the summer surge in coronavirus cases.
“It is just not paying attention to human psychology if you think you’re going to be able to put those kids back together and not have them go and party,” said Dr. Megan Ranney, an emergency physician and associate professor of Emergency Medicine at Brown University.

“Any of us who were young adults know what it’s like to be in your late teens and early 20s. It’s up to those colleges to make it easy for those kids to do the right thing, to do regular testing, have mask mandates, have masks easily available, and if needed, to shut down those campuses,” she told CNN.
Young people generally have less severe outcomes from Covid-19 infection. But they are not immune to the virus and can still spread it to others who are more vulnerable.
Dr. Tom Frieden, the former director of the Centers for Disease Control and Prevention, noted that the virus spreading anywhere is a threat to people everywhere.
“What we have to do is recognize that we’re all in it together,” he told CNN. “And any one group or any one part of the country that gets infected or has a high rate of disease is a risk potentially to every other age group and every other part of the country.”
According to the Chronicle of Higher Education, just 22.5% of surveyed universities say that they will hold classes fully in person or primarily in person. Some of those that have opened campuses or held classes recently are already seeing cases, even with protections in place.

Two universities in Oklahoma have also seen a significant number of cases.
An Oklahoma State University sorority house is under quarantine after 23 members tested positive for Covid-19, according to the university.
“Last night OSU officials learned of 23 positive COVID cases in an off-campus sorority house. The rapid antigen testing was performed at an off-campus health care facility,” a statement from the university read.
The entire sorority house is in isolation or quarantine after the confirmed cases, and residents “will be prohibited from leaving the facility,” the university said.
At the University of Oklahoma, nine football players tested positive for the coronavirus as the Big 12, its conference, continues to gear up for fall football, head coach Lincoln Riley said Saturday.
The test results came back after the team had returned from a one-week break from pre-season practice.
“We’ve done such a tremendous job this entire time. You know when (you) give players time, there is risk in that. This isn’t the NBA, we don’t have a bubble. We all have to continue to work to do a better job by all accounts. We’re still confident in the plan that we have,” Riley said.