The university announced Monday it was cancelling in-person classes for undergraduates after about 130 tested positive in the first week of the semester. 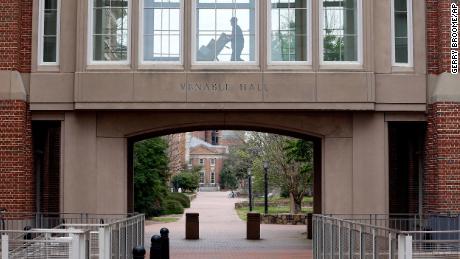 “We had a good road map that we developed,” he told CNN affiliate WRAL. “When activities began to happen off campus and then bringing some of that back into the residence halls, that’s where we began to see the positive cases and we were surprised at the velocity and the magnitude of the spread.”
Students on campus were generally washing hands, practicing social distancing, and wearing masks to prevent the spread, Guskiewicz said.
But Student Body President Reeves Moseley told CNN on Tuesday, “Students weren’t necessarily social distancing and upholding community standards.”
Remote-only learning starts Wednesday, and officials plan to “de-densify” residence halls, Guskiewicz said.
Most undergraduates in dorms would find another place to live for the fall, the university said.

Still, sports will be played this fall, university officials said.
“We still are expecting to play this fall, and we will continue to evaluate the situation in coordination with the University, the ACC, state and local officials, and health officials,” the athletics department said in a statement.
“The health and safety of our student-athletes, coaches and staff, and community remains our priority,” it said.
Athletes will continue to take classes online and be able to participate in workouts while following safety protocols, it added.
UNC is a member of the Atlantic Coast Conference, which has announced plans to begin its football and other fall sports seasons the week of September 7.
Moseley, however, questioned how the school can say it’s safe to play sports if it’s not safe to attend class.
“How is ACC going to be able to make a decision to bring people into these communities that are seeing a rise in cases already?” he said.

The school has just a 5.5% capacity for on-campus students who need to quarantine, its tracking dashboard shows. Of 73 rooms available Monday afternoon, only four were available to students.

The positivity rate among students rose to 13.6% of the 954 students tested during the week that ended Sunday, and five employees also tested positive, according to the university’s Covid-19 dashboard. As of Monday morning, 177 students were in isolation and 349 were in quarantine, both on and off campus.
Most had mild symptoms, Guskiewicz and Executive Vice Chancellor and Provost Robert A. Blouin said in a letter to the community.
On Sunday, UNC announced a fourth cluster of Covid-19 cases on campus, defined as five or more cases in proximity. Two clusters were identified at residence halls, one as at a private apartment complex that houses some students, and another was among members of a fraternity.
Two universities in Oklahoma have also seen a significant number of cases.
An Oklahoma State University sorority house is under quarantine after 23 members tested positive for Covid-19, according to the university.
Colorado College in Colorado Springs said 155 students are currently in quarantine for 14 days at a residence hall after a new student arrived on campus and tested positive for Covid-19.