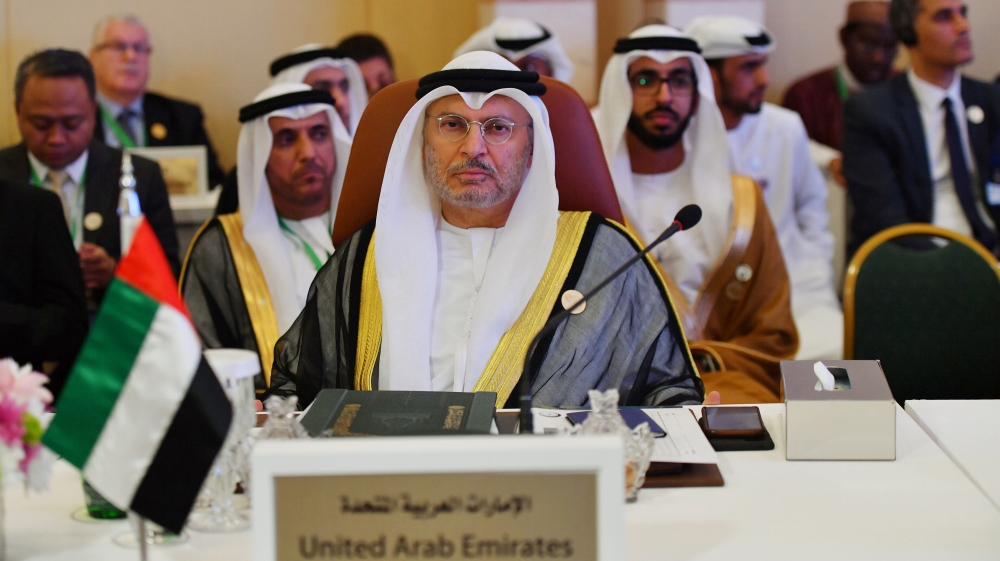 US-sponsored deal was seen as firming up opposition to regional power Iran, which Gulf states, Israel and the US see as the main threat in the Middle East [Waleed Ali/Reuters]

The United Arab Emirates’ agreement to normalise ties with Israel is a “sovereign decision” that was not directed at Iran, UAE Minister of State for Foreign Affairs Anwar Gargash said.

Israel and the UAE announced they were establishing full diplomatic relations in a US-brokered deal that will see Israel delay plans for annexation of land it already illegally occupies that is sought by the Palestinians for their future state.

“The UAE-Israeli peace treaty is a sovereign decision not directed at Iran. We say this and repeat it. We do not accept interference in our decisions,” Gargash said on Twitter on Monday.

On Sunday, the UAE summoned Iran’s charge d’affaires in Abu Dhabi and gave him a “strongly worded memo” in response to a speech by Iranian President Hassan Rouhani that the foreign ministry described as “unacceptable”.

Speaking on Saturday, Rouhani said the UAE had made a “huge mistake” in reaching an agreement to normalise ties with Israel and called it a betrayal by the Gulf state.

The US-sponsored deal has been seen as firming up opposition to regional power Iran, which Gulf states, Israel and Washington view as the main threat in the conflict-riven Middle East.

On Sunday, the secretary-general of the six-member Gulf Cooperation Council condemned “threats” by Rouhani and other Iranian officials towards the UAE over the accord.

Israel Prime Minister Benjamin Netanyahu has insisted the annexation plans are only on “temporary hold” at the request of the US.

On Sunday, Israel’s intelligence minister Eli Cohen told Army Radio that Bahrain and Oman could be the next Gulf countries to follow the UAE in formalising ties with Israel.

Israel signed peace agreements with Egypt in 1979 and Jordan in 1994. But the UAE, along with most other Arab nations, has had no formal diplomatic or economic relations with it.

Oman maintains friendly ties with the US and Iran and has previously been a go-between for the two feuding countries.

A close ally of Saudi Arabia – which has not yet commented on the UAE-Israel accord – Bahrain hosted a senior Israeli official at a security conference in 2019 as well as a US-led conference on boosting the Palestinian economy as part US President Donald Trump’s Middle East plan.

Government sources in Kuwait said its position towards Israel is unchanged, and it will be the last country to normalise relations, local newspaper al-Qabas reported.