The dire warnings — reliant on false information and racist tropes — foreshadowed a bitter fall campaign as Trump seeks to reverse a slide in the polls. And they presaged a drawn out post-election battle as Trump preempted a potential loss with warnings of fraud.
“The only way we’re going to lose this election is if this election is rigged,” he said during a stop in Oshkosh, Wisconsin, the second of several battleground events he is using this week to counterprogram the Democrats’ all-digital convention.
Over the past week, Trump’s attempts at shoring up his political standing have taken on a frantic and often conspiratorial energy, including attempts to limit mail-in voting by refusing new funding for the post office, racist and sexist attacks on former Vice President Joe Biden’s new running mate and persistent unfounded warnings that November’s vote will be rigged.
He appeared to inject a new scheme meant to deprive him of a second term on Monday: a “deep state” he is concerned might announce a coronavirus vaccine on November 4 — the day after the election.
“I don’t need that,” he said during his late-afternoon speech in Wisconsin.
Yet it was his declaration that a loss in November could only come as a result of election fraud that was the most startling. Trump has previously warned of a “rigged election,” including on Monday morning as he issued unfounded warnings about mail-in voting and drop boxes for ballots. Combined with a declaration that his loss would only be a result of cheating, Trump is giving voice to Democratic fears that he will refuse to accept the election results.
Elsewhere in his speech, Trump said he should be granted a “redo” on his first term, alleging falsely that his first campaign was spied upon by the previous administration. And at another point, he joked that he may remain in office for “16, 20” years.
Though made in jest, those remarks only fuel the impression that Trump is preparing, at a minimum, to challenge November’s results if they do not show him winning. Taken together, the remarks suggest Trump is actively working to undermine the results of an election that polls currently show him losing.
Leaning heavily on the “law and order” mantle he adopted in the wake of racially charged protests earlier this summer, Trump declared Monday it was “crunch time” for a campaign that many of his advisers have been urging him to focus on more intently as Election Day nears.
He escalated his attacks on Biden to dramatic new levels as he hopes to blunt whatever bounce his rival might enjoy from this week’s convention.
“Do you want to be ruled by the radical left-wing mob or do you want to stand tall as free men and women in the greatest country on Earth?” Trump asked, echoing equally pessimistic remarks earlier Monday in Minnesota.
“We’re going to have an election that is all about the survival of the nation,” Trump told a crowd that had gathered inside an airport hangar south of Minneapolis for a scaled-down version of one of his signature rallies.
“Joe Biden is the puppet of left-wing extremists trying to erase our borders, eliminate our police, indoctrinate our children, vilify our heroes, take away our energy,” Trump added, claiming Biden was looking to “replace American freedom with left-wing fascism.”
“Fascists,” he said. “They are fascists.” 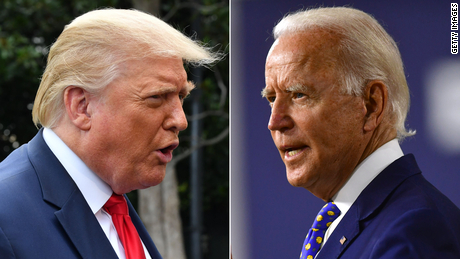 Unwilling to cede the week to Democrats as they convene their presidential nominating convention, Trump was planning a series of stops in battleground states, including near Biden’s hometown in Pennsylvania on Thursday, the same day he’s expected to formally accept the Democratic nomination.
Trump also plans to travel to Arizona, and said Monday he would stop in Iowa to survey storm damage.
All states will prove essential for Trump if he hopes to win in November. Polls have shown him trailing Biden badly, though a CNN poll conducted by SSRS released on Monday showed the race tightening.
Once his trademark political event, massive arena rallies appear off-limits for the foreseeable future amid concerns about the still-raging coronavirus pandemic. Instead, Trump is flying from airport to airport and greeting crowds gathered in hangars that are partially outdoors. Initially resistant to the idea of smaller rallies, Trump eventually came around to the idea when advisers told him they could ultimately be the only type of political event possible this season.
That is, for now, more than Biden is attempting. Instead, he has convened online events and, along with every other speaker, will appear at his nominating convention this week remotely.
Republicans believe the week-long event will get heavy media attention and voter attention, part of the reason Trump’s campaign is unleashing a counter-programming effort that includes Trump’s travel along with a massive digital ad buy that includes a rare four-day takeover of the YouTube banner.
Vice President Mike Pence and the President’s children are also planning campaign events.

Meanwhile, the RNC and Trump campaign remain quiet about their own convention plans for next week. They have yet to reveal a speakers list or even the venue where the speeches will occur.
Trump said in Wisconsin on Monday that he would deliver his own acceptance speech from the White House and the Republican National Committee has applied for a permit to conduct a fireworks display over the Washington Monument on August 27, the day Trump is expected to deliver his acceptance address.
“We’re doing a real speech on Thursday, next Thursday,” he said. “So, you’ll be listening — live from the White House. And we have plenty to say.”
Trump’s advisers have been working on drafts of his speech that, like his speeches on Monday, delve heavily into the law and order themes the President has adopted as his election rallying cry.
It was rhetoric he began scaling up amid protests and riots in June following the killing of George Floyd, a Black man who died in Minneapolis when a White police officer knelt on his neck during an arrest. Trump did not visit the site of his death on Monday but did host an event with businesses owners affected by the unrest.
In remarks later, Trump railed against Biden for not being sufficiently supportive of police and touted his own decision to suspend refugee settlement during the pandemic, singling out “terror afflicted nations like Syria and Somalia.”
Minnesota has a sizable community of Somali immigrants — including Rep. Ilhan Omar, a progressive firebrand who Trump has assailed as being insufficiently patriotic.
In his remarks, Trump called out Omar by name claiming she was “a horrible woman who hates our country.”
This story has been updated with additional developments Monday.