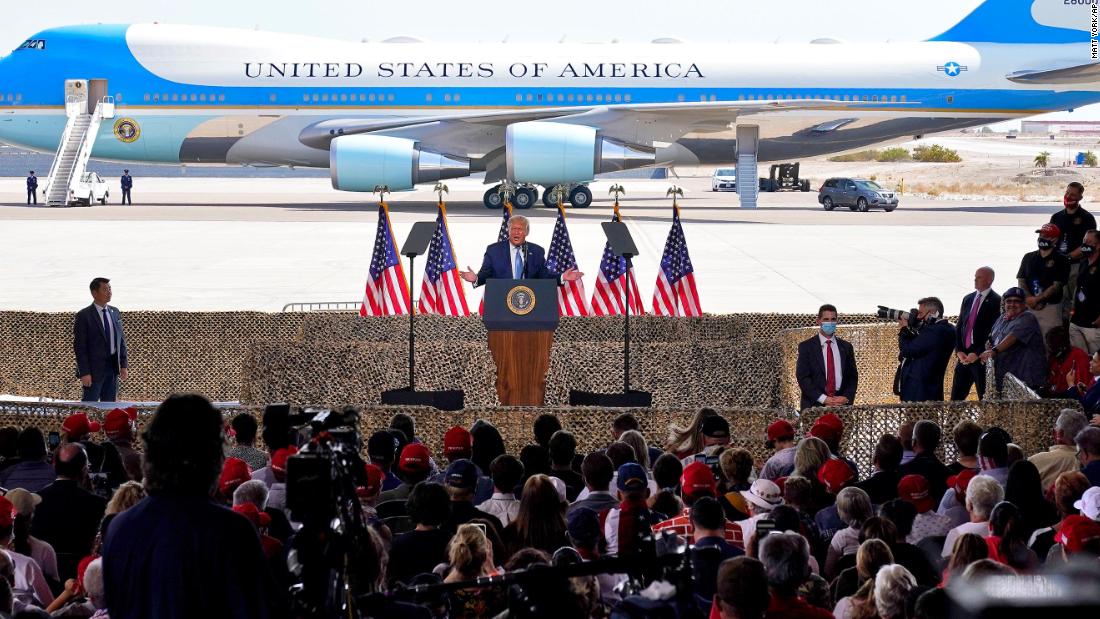 In a speech accepting the endorsement of the National Border Patrol Council, Trump pushed for four more years in the White House and praised the Arizona’s Republican governor, Doug Ducey, for knocking out Covid-19, even as the state battles another surge.
“I want to congratulate your governor. Because we had a spike and he knocked that spike out so fast. … Are you sure you even had a spike?” Trump asked.
The President reserved a large portion of his speech near the US-Mexico border for attempting to compare his immigration policies to the Democratic Party’s stance.
“Joe Biden is the puppet of the radical left-wing movement that seeks the complete elimination of America’s borders and boundaries. They want to take the wall down. They don’t want to have borders. They want to have sanctuary cities,” Trump claimed.
Listing his immigration accomplishments, the President touted the elimination of “birth tourism” leading to “anchor babies” — a loaded term used to refer to children purposefully delivered in the US by foreign mothers in order to obtain US citizenship.
“We issued regulations to stop the horrible practice of birth tourism. You know what that is, right? Anchor babies … Have a baby in our country and you’ll stay for the rest of your life. Congratulations, you’re a citizen for 90 years,” Trump said.

Crowd control ahead of the event included holding attendees in spaces and in lines where there was no social distancing and masks were largely not worn, according to CNN correspondent Miguel Marquez, who was on the ground for the President’s speech in Yuma.
After being bussed to an airplane hangar and undergoing temperature checks, attendees in Yuma, where it was 107 degrees Fahrenheit, were brought into the enclosed hangar. Inside, chairs were set next to each other and about one-third of attendees wore masks. After more than an hour, the hangar was opened up ahead of the President’s speech.
Trump acknowledged the uncomfortable heat during his speech.
“You know it’s 122 degrees in this place. … This is like a test. You think Joe Biden could do this? I don’t think so,” the President said, later joking that he’d only seen “four or five people go down, because it is hot in here.”
In late June, Arizona was confronting a dramatic rise in Covid-19 cases, forcing officials to reimpose a slew of coronavirus restrictions about two months after the state started reopening its economy. The strategy has appeared to work statewide, but the state is continuing to try to prevent another surge in cases.
Still, the Arizona Health Department says the county Trump was giving his speech in has an 18% coronavirus positivity rate. It has consistently had one of the highest infection rates in the country.
The President held his first campaign rally since the start of the pandemic in mid-June at an arena in Tulsa, Oklahoma. While it was touted the event as a successful return back to normal, attendance didn’t meet the campaign’s expectations, likely due to public health concerns.
All Trump campaign staffers at the Oklahoma event had to quarantine for a week after making contact with colleagues who tested positive for coronavirus. Multiple Secret Service officers were also instructed to self-quarantine after two of their colleagues at the rally tested positive, too.
Following blowback from the Tulsa event, the campaign opted to hold smaller events, typically in partially open-air spaces like airplane hangars or airport tarmacs.
At these events, the campaign has been purposely limiting the size of the crowd, attempting to establish social distancing and vocally encouraging the use of masks.
Trump was last in Arizona in late June, when he visited Yuma and delivered a speech inside a Phoenix megachurch.
The following month, at least eight Secret Service agents had to quarantine in the city after coming down with coronavirus while preparing for a visit by Vice President Mike Pence.