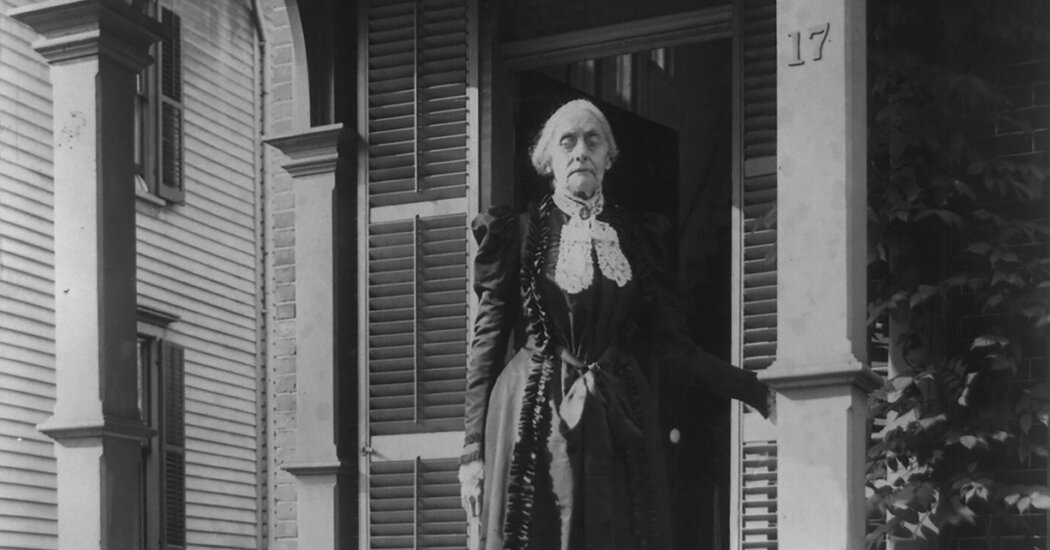 WASHINGTON — President Trump on Tuesday said that he would pardon Susan B. Anthony, the women’s suffragist who was arrested after voting illegally in 1872 and charged a $100 fine, as he tried to appeal to female voters on the 100th anniversary of the 19th Amendment giving them the right to vote.

The pardon appeared to be an effort to distract from the Democratic National Convention and narrow the historically large gender gap that has him trailing Joseph R. Biden Jr. in the White House race.

Mr. Trump teased the pardon as he traveled on Air Force One on Monday, telling reporters he was going to erase the conviction of someone “very, very important.”

Ms. Anthony was tried for illegally voting, and protested the fine that she was charged.

“She was guilty for voting,” Mr. Trump said on Tuesday, “and we’re going to be signing a full and complete pardon.”

Ady Barkan previews his speech to the convention.
Jill Biden returns to her old classroom to deliver a convention speech.
Christie calls Kasich a ‘backstabber’ and tells Democrats ‘you can have him.’
See more updates

Unlike other pardons that the president has given, Ms. Anthony is not someone whose work Mr. Trump has spoken of either in his campaign or during his presidency.

She is also an increasingly divisive figure, adopted by anti-abortion forces and criticized for relegating Black suffragists to the sidelines. On Tuesday, Marjorie Dannenfelser, president of the Susan B. Anthony List, an anti-abortion political group, and Cleta Mitchell, an attorney who represents conservative groups, were in attendance as Mr. Trump made his announcement.

He has pardoned or granted clemency to a number of people he personally knows or for people whose cases resonate with him, such as the former governor of Illinois, Rod R. Blagojevich, who was serving a prison sentence related to conviction on corruption charges. Mr. Trump recently granted clemency to his longtime political adviser, Roger J. Stone Jr., who was convicted on several charges stemming from the investigation into possible conspiracy between the Trump campaign and Russian officials. The pardon for Ms. Anthony would be the 26th of his presidency.

Mr. Trump, who has repeatedly been accused of sexual harassment or assault and who has often made degrading comments about women, is facing a deep gender gap in his campaign against Mr. Biden. On Tuesday, surrounded by several female supporters, Mr. Trump declared that “women dominate the United States” and complained that the coronavirus had darkened the economic picture for women.

But the event on Tuesday did not stay on the topic of women’s suffrage for long.

When asked by reporters about the concept of mail-in voting, Mr. Trump attacked the practice, falsely claiming that dogs and cats received ballots to vote en masse, before inviting Ms. Mitchell, whom he called “one of the great lawyers,” to the podium to speak.

“All of us can name multiple times when we’ve sent a letter across town and it either didn’t get there or came back undeliverable,” Ms. Mitchell claimed. “We should have Election Day, we shouldn’t have election three months, and we sure should be able to know by election night who won.”

People close to the president said that Mr. Trump was seeking to create a news story during the Democrats’ convention, where Mr. Biden will be nominated. Advisers believed that unlike some of Mr. Trump’s other pardons or grants of clemency, it will be harder to criticize an action benefiting a woman whose actions helped lead to women’s right to vote.

Whether that is the case remains to be seen. Mr. Trump has seen an erosion with a key group of women voters — suburban women — during his presidency, and his response to the coronavirus pandemic has not helped him.

But during the event on Tuesday, Mr. Trump turned his attention to the Democratic convention, criticizing former first lady Michelle Obama for a speech made the evening before in which she said Mr. Trump “cannot meet this moment” and whose presidency she said threatened the future of the country.

“She was over her head and frankly she should have made the speech live which she didn’t do,” Mr. Trump said. “I thought it was a very divisive speech, extremely divisive.”

If President Barack Obama had done a better job, Mr. Trump said, then he would not have been elected four years ago and would be “building buildings someplace” and “having a good time.”