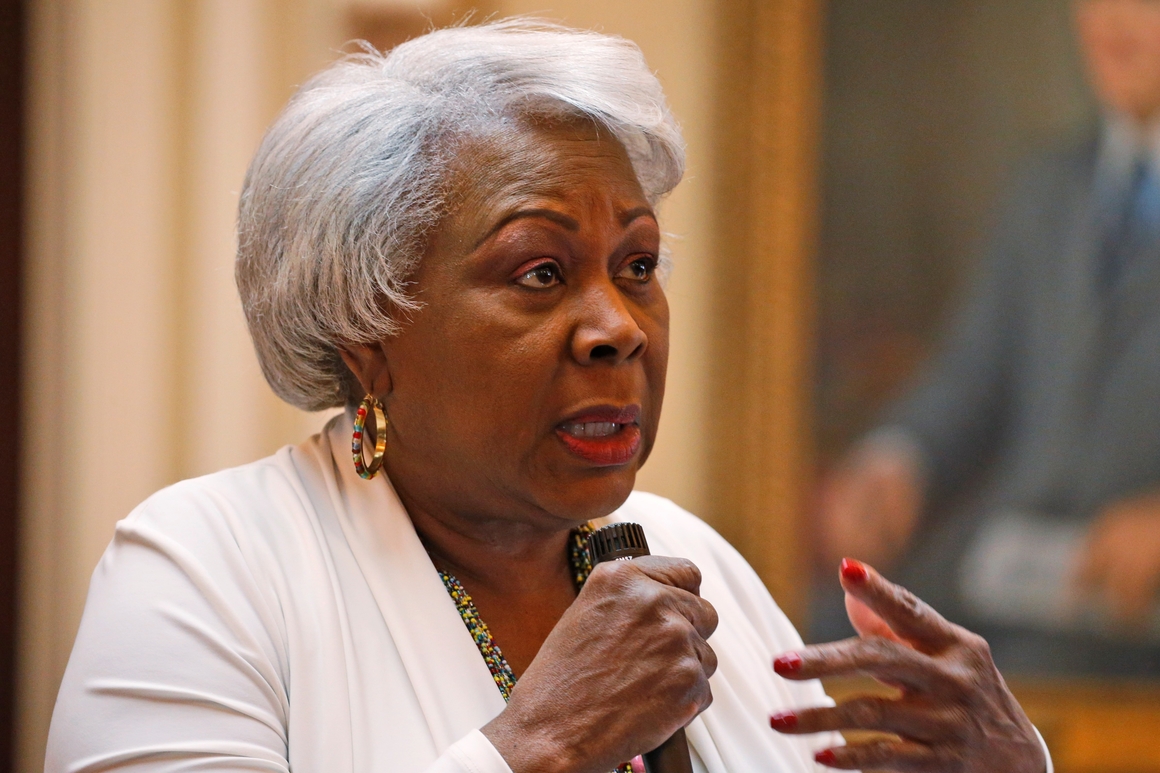 Sen. Louise Lucas speaks during debate on the Senate floor at the Capitol on March 8 , 2020, in Richmond, Va. | Steve Helber/AP Photo

NORFOLK, Va. — A Virginia state senator has been charged with damaging a Confederate monument in Portsmouth during protests that also led to a demonstrator being critically injured when a statue was torn down, authorities said Monday.

Sen. Louise Lucas faces charges of conspiracy to commit a felony and injury to a monument in excess of $1,000, Portsmouth Police Chief Angela Greene said during a news conference. The protest occurred in June.

Lucas is a longtime Democratic legislator and a key power broker in the state Senate, joining the chamber in 1992. The charges were filed the same week Virginia lawmakers are taking up dozens of criminal justice reforms during a special legislative session.

The reaction from some of her fellow Democrats was swift.

The American Civil Liberties Union of Virginia called for the charges against Lucas and several others to be dropped. The ACLU said the charges constitute a stark overreach by police because they were not approved by the local prosecutor’s office.

Lucas did not respond to an email and phone call seeking comment. Her attorney, Don Scott, told WAVY-TV that Lucas will “vigorously” fight the case and be vindicated.

Lucas is being charged at a time when many memorials to the Confederacy are being taken down, whether by demonstrators opposed to racial injustice or by authorities seeking to dismantle them through official channels. The monuments have long been viewed by many as symbols of white supremacy. But they’ve drawn increasing attention following the death of George Floyd, a Black man who died in Minneapolis police custody.

The monument in Portsmouth consists of a large obelisk and statues of four Confederate military personnel. During protests that drew hundreds of people in June, heads were ripped off some of the statues while one was pulled down, critically injuring a demonstrator.

Greene, the Portsmouth police chief, said that “several individuals conspired and organized to destroy the monument as well as summon hundreds of people to join in felonious acts.”

Greene said those acts “not only resulted in hundreds of thousands of dollars in damage to the monument, but also permanent injury to an individual.”

Greene did not detail exactly what Lucas or several other people are accused of doing did to merit the charges that have been filed against them.

Other people facing charges include members of the local NAACP chapter, a local school board member and members of the public defenders office, the police chief said.

Greene said requests were made to state and federal authorities to conduct an independent investigation. And she said that a discussion with the Portsmouth Commonwealth’s Attorney “did not yield any action.”

“It was the duty of the Portsmouth Police Department to begin a thorough and comprehensive investigation,” Greene said.

Stephanie Morales, the Portsmouth Commonwealth’s Attorney, told The Associated Press in an email that her office did not sign off on the police department’s charges.

Claire G. Gastañaga, executive director of the ACLU of Virginia, said Virginia is one of the few states in which a felony warrant can be filed without a prosecutor’s approval.

“These charges are political, and I think they’re discriminatory,” she said.

“The police department is making decisions about who should be charged in a circumstance in which the elected (prosecutor) is being bypassed,” Gastañaga added. “The police want a different result” and that is alarming.

Meanwhile, Republican Party of Virginia Chairman Rich Anderson said the senator should turn herself in.

“Felony charges leveled against a sitting state senator are to be taken seriously, and should not be sought out for political gain,” he said in a statement. “It is for that reason that the Republican Party of Virginia calls for Senator Lucas to turn herself in. Immediately.”