The special prosecutor tasked with probing the state attorney’s handling of the Jussie Smollett investigation in Chicago has ruled the office abused its discretion in the case against the actor, but did nothing criminal.

In a statement on the conclusions of his investigation, special prosecutor Dan Webb sharply criticized the handling of the Smollett case by Cook County State’s Attorney Kim Foxx and her assistant prosecutors, saying their handling was marked by disarray and misleading statements.

JUSSIE SMOLLETT’S ALLEGED ATTACKERS NOW SAY THEY WILL TESTIFY: WE WILL ‘CONTINUE TO TELL THE TRUTH’

In March last year, Foxx’s office surprised and angered many in Chicago by dropping charges that accused the former “Empire” actor of staging an alleged racist and homophobic attack against himself. Smollett is still adamant that the attack was real and wasn’t a publicity hoax.

Webb’s findings announced Monday came after charges were restored against Smollett by the same special prosecutor in February. Webb said at the time that dropping the charges against Smollett was unjustified, including because the evidence against Smollett seemed overwhelming and because he was not required to admit that the attack was a hoax.

The state’s attorney’s office’s “decision-makers” who worked the initial Smollett case “did not learn of any new evidence between when the [Cook County State’s Attorney’s Office] filed a 16-count indictment against Mr. Smollett on March 7, 2019, when the CCSAO believed it had a strong case against Mr. Smollett, and March 26, 2019, when the entire indictment was dismissed,” the prosecutors’ office found.

Both “decision-makers” – Acting State’s Attorney Joseph Magats and Lead Prosecutor Risa Lanier – had “significantly and meaningfully divergent explanations” for how the decision was made, the findings said.

In further outlining what the special prosecutor identified as Foxx’s office’s first finding of abuse of discretion, Webb adds that Smollett was neither required to plead guilty to any crimes nor admit any wrongdoing. In fact, as Webb’s report states, “following the court proceedings on March 26, 2019, Mr. Smollett publicly stated he was completely innocent.”

“The only punishment for Mr. Smollett was to perform 15 hours of community service that had no relationship to the charged conduct,” the report further states. The office also “only” required “Mr. Smollett to forfeit his $10,000 bond as restitution to the City of Chicago (a figure amounting to less than 10% of the $130,106.15 in police overtime pay that the City alleges it paid solely due to Mr. Smollett’s false statements to police.”

When Lanier announced the dismissal of the case during a hearing, she read a statement that she allegedly wrote in collaboration with Smollett’s attorneys, Webb wrote. He called the action “atypical.”

When speaking to the press about the decision to dismiss, Foxx and other state’s attorney employees made misleading or outright false statements, including regarding the amount which Smollett was required to pay, according to the report.

The office, and Foxx herself, “made false public statements representing that $10,000 was the most Mr. Smollett could have been ordered to pay in restitution under the law when there is no such cap under the provision of the disorderly conduct statute under which Mr. Smollett was charged.” 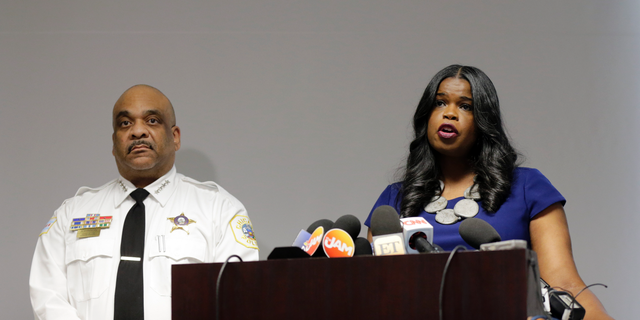 They also falsely claimed that Smollett had no criminal record, despite his previously disclosed DUI conviction, for which he was ordered to serve 24 months of probation.

One of the other focuses of Webb’s inquiry was about whether Foxx acted improperly by speaking to a Smollett relative and a onetime aide of former first lady Michelle Obama before the charges were dropped, or by weighing in on the case after recusing herself.

Foxx allegedly continued communicating with Smollett’s sister, Jurnee Smollett, even after she learned of her brother’s case, and lied to the press about it after the fact, the report states.

Charging documents refiled by Webb in February accuses the Black, openly gay actor of making a false police report in claiming two men attacked him early on Jan. 29, 2019, in downtown Chicago, shouting slurs and looping a rope around his neck.