SpaceX, the space-faring firm founded by Elon Musk, is making it easier to get rural and underserved communities online. A change to one of the company’s websites could make the process simpler.

The company is in the process of building Starlink, a satellite constellation designed to bring higher speeds and lower latencies than competing services. The trick is that Starlink satellites orbit much lower than other satellites, around 550 kilometers above sea level. Because they will be closer to the ground, SpaceX is launching a large number of satellites to ensure ground-based terminals can maintain a connection to the constellation in the sky. SpaceX has applied for permission to launch up to 42,000 satellites.

It could be a big win for rural and underserved communities — people who can’t rely on ground-based connections. But hopeful users tell Inverse that, until recently, signing up on the website to receive more information has proven difficult. Critically, evidence suggests issues might be solved if a limited beta test proves successful.

“The Starlink’s sign-up requires a street address,” Alaska-based Craig Duncan tells Inverse. When he and Millie Duncan retired from their professional positions seven years ago, they moved from Juneau to a small island in the state’s southeast. Their new home has caused problems with getting on board with Starlink — the nearest road is around 10 miles away. “We have no streets on the island.”

When the Duncans attempted to register, they found that the website prompts the user for two pieces of information: an email address, and a physical address. The latter field uses Google-provided suggestions to complete the form. The “submit” button will remain unavailable until the user chooses a Google-provided suggestion. This has left people living in spaces with no traditional address to plug in confused about how to get signed up.

“I live off-grid in the middle of nowhere with no internet access available, precisely what Starlink is supposed to be for,” Larry Maass, a 69-year-old retiree, tells Inverse. “My street exists in the UPS, FedEx, and USPS databases but not Google Maps.”

However, a new tweak to the website could help solve these issues. The form now suggests that users can input a “Plus Code” if their address is not listed or they do not have an address. Logs from the Wayback Machine suggest the tweak was made at the start of August. 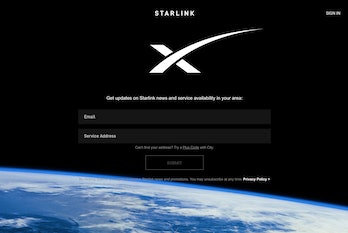 A Plus Code is a Google-provided string of characters that correspond to latitude and longitude. Users can now provide a Plus Code in forms like these to point Google Maps to a specific marker on a map.

To generate a Plus Code and sign up for more information about Starlink, here’s what to do:

Although the addition is small, it could help users that were otherwise struggling to input their location to get signed up. Ultimately, this may help the service reach more users that would otherwise be left behind by poor on-the-ground infrastructure.

“I currently have Hughes satellite and am frustrated by the very slow download speeds and at times the system seems overloaded,” David Pratt, a 59-year-old retiree in Garden City, Utah, tells Inverse. “With as many satellites as Starlink will have I am hopeful the redundancy will result in faster and more dependable service.”

SpaceX did not respond to Inverse‘s requests for comment. The company is expected to send up its 11th batch of Starlink satellites on August 18, bringing the total number launched to 655.