Two objects, a cosmic cloud of gas and a supermassive black hole, are simultaneously separated by 100 light-years and united by something spectacular — a distinct heartbeat.

An international team of researchers detected what they describe as a ‘gamma-ray heartbeat’ from a cosmic gas cloud that happens to be synchronized with a massive black hole. They’re still not exactly sure how that happened.

The discovery is detailed in a study published Monday in the journal Nature, and provides new clues that may prove to be helpful in bettering our understanding of how cosmic rays are produced in the universe. 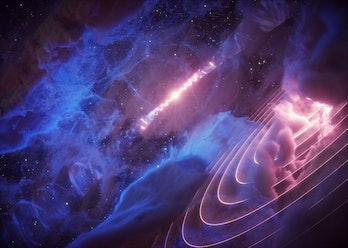 The gas cloud pulsates at the same rhythm as a distant quasar with a black hole at its center.DESY, Science Communication Lab

“Like water in the whirl above the drain of a bathtub” — Located around 15,000 light-years away from Earth in the Milky Way galaxy, a black hole orbits a giant star in a micro-quasar system dubbed SS 433. A quasar is an extremely bright, active galactic nucleus with a supermassive black hole at its center. SS 433 appears as a scaled-down version of a quasar.

The star is around 30 times more massive than the Sun, and the black hole is around 10 to 20 solar masses.

The two objects are orbiting each other during a period of 13 days, as the black hole gobbles up matter from the giant star.

“This material accumulates in an accretion disc before falling into the black hole, like water in the whirl above the drain of a bathtub,” co-author Jian Li, a fellow at the German Electron Synchrotron (DESY), explains. “However, a part of that matter does not fall down the drain but shoots out at high speed in two narrow jets in opposite directions above and below the rotating accretion disk.”

The accretion disc is not precisely situated in the plane of the orbit of the star and its accompanying black hole, causing it to sway like a spinning top. As a result, the two streaming jets spiral their way into space rather than beaming out into two straight lines.

The precession, or wobbling, of the jets has a period of around 162 days. Fascinatingly, about 100 light-years away from SS 433, astronomers detected a gamma-ray, or electromagnetic radiation, signal from a cosmic gas cloud with the same period of time. This gas cloud is known as Fermi J1913+0515.

Scientists believe that the black hole is somehow powering the gamma-ray emission by the cloud because they both following the same rhythm — but how and why this is possible still needs to be confirmed.

“Finding such an unambiguous connection via timing, about 100 light-years away from the microquasar, not even along the direction of the jets is as unexpected as amazing,” Li said. “But how the black hole can power the gas cloud’s heartbeat is unclear to us.”

Further observations are needed in order to determine the main cause behind this unlikely synchronized duo, but scientists do have one theory so far: They believe that the nuclei of the hydrogen atoms produced at the end of the black hole’s jets are causing the gamma-ray emissions.

“SS 433 continues to amaze observers at all frequencies and theoreticians alike,” Li said. “And it is certain to provide a testbed for our ideas on cosmic-ray production and propagation near microquasars for years to come.”

Abstract: Microquasars, the local siblings of extragalactic quasars, are binary systems comprising a compact object and a companion star. By accreting matter from their companions, microquasars launch powerful winds and jets, influencing the interstellar environment around them. Steady gamma-ray emission is expected to rise from their central objects, or from interactions between their outflows and the surrounding medium. The latter prediction was recently confirmed with the detection of SS 433 at high (TeV) energies1. In this report, we analyse more than ten years of gigaelectronvolt gamma-ray data from the Fermi Gamma-ray Space Telescope on this source. Detailed scrutiny of the data reveal emission in the vicinity of SS 433, co-spatial with a gas enhancement, and hints of emission possibly associated with a terminal lobe of one of the jets. Both gamma-ray excesses are relatively far from the central binary, and the former shows evidence of a periodic variation at the precessional period of SS 433, linking it with the microquasar. This result challenges obvious interpretations and is unexpected from previously published theoretical models. It provides us with a chance to unveil the particle transport from SS 433 and to probe the structure of the magnetic field in its vicinity.