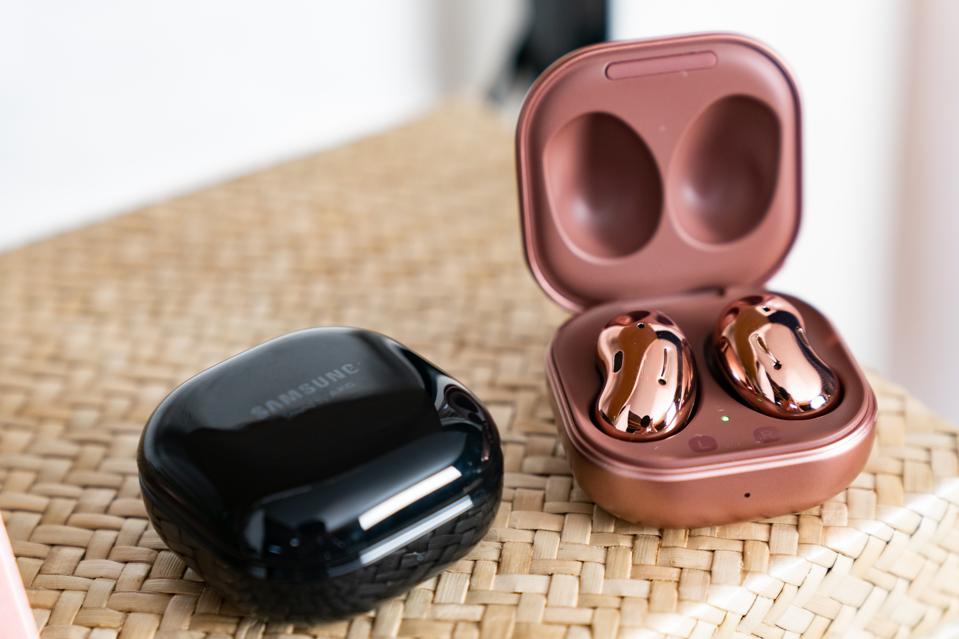 Samsung Electronics Co. Galaxy Buds Live wireless earphones are displayed during the Samsung … [+] Unpacked product launch event in New York, U.S., on Tuesday, Aug. 4, 2020. Samsung Electronics Co. set out its premium Android device lineup for the rest of the year with the launch of the Galaxy Note 20 series and a teaser for the upcoming Galaxy Z Fold 2 foldable in its first virtual launch event. Photographer: Jeenah Moon/Bloomberg

All of my concerns about Samsung’s bean-shaped Galaxy Buds Live immediately faded when I actually got to use them.

The design, the sound and the features are surprisingly impressive. Samsung has made a genuinely unique and innovative product in a sphere that is highly resistant to design creativity.

My main worry was centred around Samsung’s long and storied history of spectacular gimmicky failures. I’m still haunted by ill-conceived ideas like Air View and Smart Pause. But the Korean company go it right this time and has moved the industry forward, which, in its defence, it always aims to do.

It’s not all rosy for Samsung’s new buds, they have their issues as any product does. But Samsung got a lot right with its new headphones, here’s what you need to know before you buy them.

The design is surprisingly good

The biggest surprise is how well the bean-shape works. Yes, it has huge meme potential, but it’s also very practical, here’s why: they fit. Like, they actually, properly, fit in your ear. Of the elaborate earbuds designs I’ve tested that have come up with a unique way to wedge into your ears, Samsung’s are one of few buds that come out with full marks, Google’s elongated wing-tip design is a close second. Microsoft’s Surface Earbuds and Apple’s AirPods don’t quite match up.

What works about the Live buds is that they’re contoured to fit the shape of your ear. The entire body of the bud fits in your ear, like they’re being cradled. Because of this the wing-tips are far more effective than on larger, protruding, buds like those from Microsoft. It’s a surprisingly effective design that makes me question how easily I’ll go back to other headphones.

If you ask Samsung why it released two flagship earbuds so close to each other in the same year, I’m sure it will tell you that the presence of Active Noise Cancelling (ANC) in the Galaxy Buds Live is the reason – just like Apple’s AirPods and AirPods Pro. They’re basically a different class of bud, just like the Note series is to the Galaxy S line.

Except, they’re not another class of buds because the active noise cancelling is virtually non existent. My battered eardrums can determine no difference between when ANC is on or off. OK, that’s not exactly accurate – the buds do some sort of job of blocking low frequency sounds, but you have to test it, and focus, to notice it.

What’s funny is that the tight, plugged fit of the Galaxy Buds Plus, thanks to the rubber ear tips, offer better ambient noise blocking, despite not having ANC.

The app and EQ settings are very good

There’s a significant difference between the sound profiles in the equalizer settings, which isn’t always the case with other earbuds. The sound profile is set to “normal” as default, and I thought they sounded a bit flat on first listen, but switching to Dynamic and Bass Boost did Pusha T his deserved justice.

There’s also a good amount of customisation in the Galaxy Wear app. You can customise what taps do in both ears, have the buds read aloud notifications and turn on ambient sound functionality (but this isn’t as impressive as the ambient sound feature on the Galaxy Buds Plus).

One other feature to customise is the ability to block touches, which brings me on to my next point…

Every truly wireless earbud has what’s known as a large capacitive area, which is the surface area you tap to issue commands. This is a notoriously difficult thing to execute because there isn’t much surface area on earbuds and designers obviously don’t want people accidentally issuing unwanted commands when they reposition their buds. The original 2017 Pixel Buds suffered from this badly.

But Samsung handles this well, not only can the buds be fondled without accidentally pausing the music or launching an AI assistant, they also have the option to turn toggle touch controls on or off. Google could learn a thing or two from Samsung here.

I will say, though, that it might’ve been executed a little too well. You have to tap the buds a few times to find the right spot that will receive commands, but this is better than the alternative.

…but that’s worthy trade-off for the unique design. As I’ve written before, I like the Galaxy Buds Plus because they are battery life behemoths, but they also feel like it. They’re big, heavy for earbuds and look a bit ungainly when sticking out of your ears.

The Galaxy Buds Live are the opposite of that, you can barely tell you’re wearing them when facing head-on. The 6 hour charge in the buds alone doesn’t match up to the 11 hours in the Galaxy Buds Plus, but the charging case for the bean-shaped headphones holds a an extra 15 hours, more than the 11 offered by the Buds Plus. So that’s two full charges and a bit.

In terms of size, the charging case pushes what my pockets can handle. I rarely carry around a bag (I will lose it) so I have to perform some magic-hat trickery with my pockets to leave the house with everything I need. Apple and Google nailed the charging case design: slender and oblong – perfectly designed for a pocket. The Galaxy Buds cube shape is bit more awkward and it’s heftier than Google’s alternative.

Samsung has achieved a near-perfect balance of price, design, battery life and sound quality with the Galaxy Buds Live. They have their issues – like the poor ANC – but they’re a genuine all-rounder and a pleasure to use.

Why You Should Wait For The Google Pixel 4a 5G