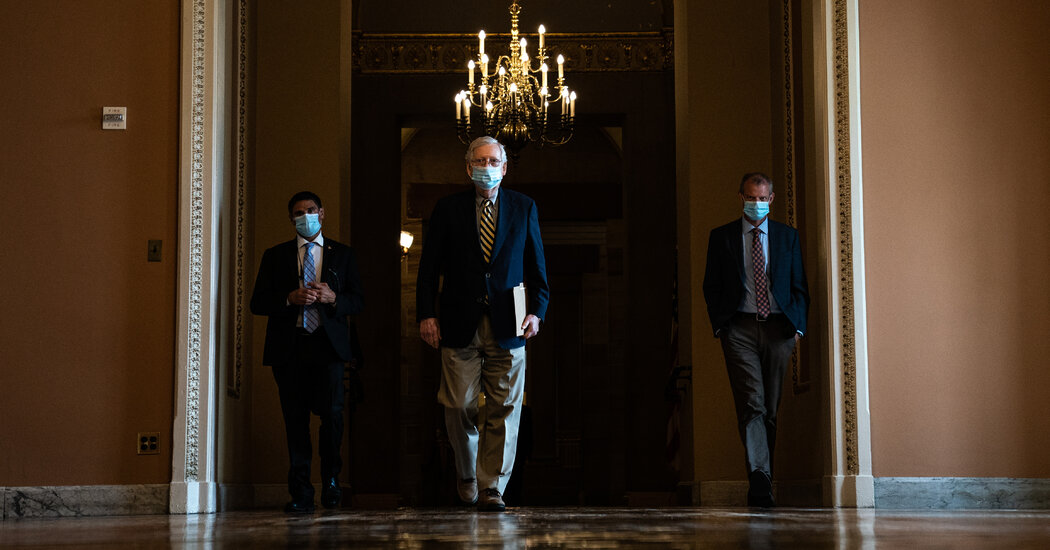 WASHINGTON — Senate Republicans on Tuesday began circulating text of a narrow coronavirus relief package that would revive extra unemployment benefits at half the original rate, shield businesses from lawsuits related to the virus and provide funding for testing and schools.

The draft measure appears to be an effort to break through the political stalemate over providing another round of economic stimulus to Americans during the pandemic. But it is unlikely to alter the debate in Washington, where Democrats have repeatedly rejected previous Republican offers as insufficient. The new bill would spend less money, in fewer areas, than those earlier offers.

The proposal, according to draft legislation obtained by The New York Times, contains many of the provisions Republicans first introduced as part of a $1 trillion opening bid before negotiations with Democrats. Those talks stalled as Democrats insisted on a much larger package, initially totaling $3.4 trillion.

With both sides at a stalemate, President Trump circumvented Congress with a series of executive actions aimed at providing additional unemployment benefits and reducing the amount of money workers contribute toward payroll taxes by temporarily delaying collection of those taxes until next year.

It is unclear whether senators, currently scattered across the country until early September for the annual summer recess, will vote on the measure anytime soon. Lawmakers and aides have begun to discuss the possibility of using the looming lapse in annual government funding, which expires at the end of September, to jointly approve a short-term spending bill and relief package.

The existence of the draft measure signaled an attempt by Senate Republican leaders — who have taken a back seat to Mr. Trump’s advisers in negotiations with Democrats thus far — to restart negotiations. And it comes after Speaker Nancy Pelosi of California called House members back early from their summer recess to vote Saturday on legislation addressing changes to the Postal Service and providing $25 billion to the beleaguered agency, which will be critical to ensuring voters can vote by mail this November.

Senator Mitch McConnell of Kentucky, the majority leader, told The Courier Journal on Tuesday that the stand-alone postal bill “could open the opportunity for discussion about something smaller than what the speaker and the Democratic Senate leader were insisting on at the point of impasse.”

Ms. Pelosi and Senator Chuck Schumer of New York, the minority leader, have repeatedly insisted that Democrats will restart negotiations only when the administration agrees to spend at least $2 trillion on another round of relief — an amount far larger than what Republicans are prepared to allocate.

“We have to try to come to that agreement now — all they have to do is recognize the need,” Ms. Pelosi said at a Politico Playbook event on Tuesday.

Democrats also want more money for the Postal Service, which is not included in the Republican bill. The draft measure would not allocate new money to the agency, but would forgive a $10 billion loan offered to the Postal Service in the $2.2 trillion stimulus law that was passed in March.

As the impasse persists, rank-and-file lawmakers facing re-election from both parties have grown increasingly uneasy with the lack of congressional action. Dozens of House lawmakers have signed on to a letter to Ms. Pelosi and Representative Steny H. Hoyer of Maryland, the majority leader, asking for a second vote on Saturday, on legislation that would revive the full $600 weekly federal benefit and ensure an automatic continuation and adjustment based on the state of the economic and public health crises.

While Mr. Trump tried to bypass Congress with his own stimulus measures, those executive actions have thus far done little to bolster an economic recovery that real-time data shows has stalled since midsummer.

The president’s move to essentially create a new $300 unemployment supplement using federal disaster funds has drawn a backlash from state officials. Only a handful of states have thus far won funding from the Federal Emergency Management Agency to put the benefits in place. FEMA officials said this week that they did not expect most workers to begin to see benefits until the end of August, and that the initial grants to states would cover only three weeks of payments.

A coalition of major business groups warned the Trump administration and congressional leaders on Tuesday that many of their member companies were unlikely to enforce a payroll-tax deferral that Mr. Trump established this month by executive order, citing concerns that doing so could expose workers to a large and unexpected tax bill next year.

The letter calculates that a worker earning $50,000 a year could face a surprise tax bill of nearly $1,100 in 2021 if companies comply with Mr. Trump’s order, given that it does not erase the tax but merely defers payment. The coalition includes the U.S. Chamber of Commerce, the National Association of Manufacturers and more than two dozen other business lobbying groups.

Mr. Trump has said he will push Congress to forgive the delayed taxes, effectively resulting in a one-time tax cut. Champions of the deferral plan claim it would pump more money into workers’ paychecks at a time when the economic recovery has slowed and remains well short of its levels before the coronavirus pandemic sent it spiraling into recession.

But analysts and business leaders have consistently expressed skepticism that it would deliver those promised benefits.

“Many of our members consider it unfair to employees to make a decision that would force a big tax bill on them next year” if Congress does not move to forgive the delayed liability, the coalition groups said in their letter. “It would also be unworkable to implement a system where employees make this decision. Therefore, many of our members will likely decline to implement deferral, choosing instead to continue to withhold and remit to the government the payroll taxes required by law.”

The new Republican plan was silent on the issue of temporary payroll tax relief, which has generated little enthusiasm among Republicans or Democrats in Congress this year, even though Mr. Trump repeatedly called it a top priority for a relief package.

Instead, the plan seeks to essentially codify and fund Mr. Trump’s planned $300-per-week unemployment supplement through the end of December, while giving new life to the liability protection measures that are a top priority of Senate Republicans and business lobbyists but were not included in any of Mr. Trump’s unilateral actions this month.

The new plan includes more money per week for unemployed workers than the original Republican legislative proposal, which would have yielded expanded unemployment benefits capped at about 70 percent of a worker’s prior income — amounting to about $200 per week. Democrats, in their $3.4 trillion measure, had fought to maintain the $600 weekly benefit first established in the $2.2 trillion stimulus law, which lapsed at the end of July as negotiators struggled to bridge stark divides over another aid package.

Those benefits would apply retroactively to the end of the $600-per-week benefits, meaning that some workers could be in line for large one-time checks if the measure were to be approved and payments were to resume in September.

But the proposal drops one of the few areas of bipartisan consensus from the original Republican plan and something Mr. Trump has said he wants to see: a second round of direct payments to low- and middle-income Americans.

The new legislation would establish the liability protections that are a longtime priority for Mr. McConnell, but that Mr. Trump has dismissed as not essential. The bill would also provide $105 billion for schools as students have begun returning to classes.