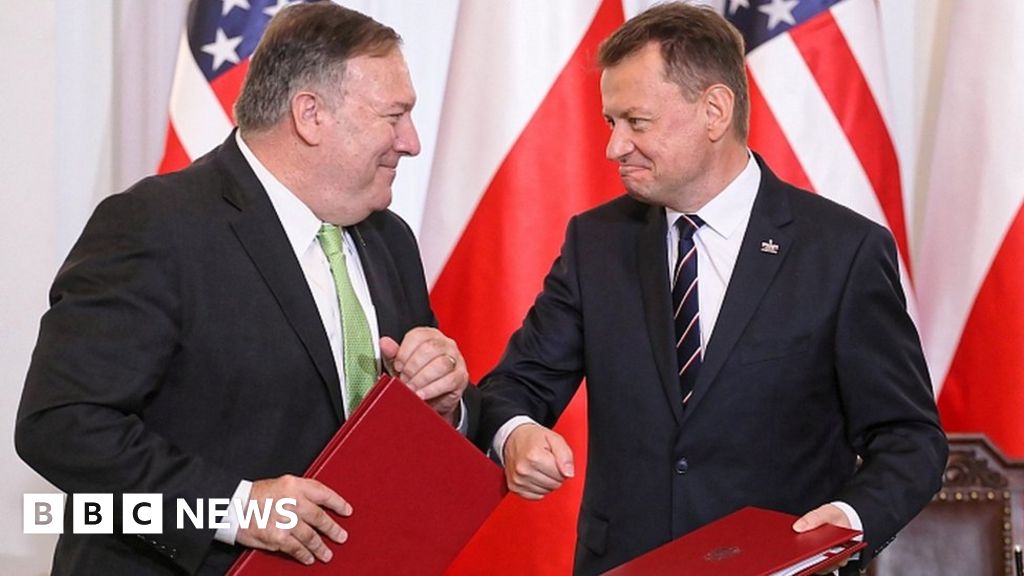 US Secretary of State Mike Pompeo has signed a new defence agreement with Poland that will see American troops redeployed there from Germany.

The deal will see the number of US troops in Poland rise to about 5,500.

Polish Defence Minister Mariusz Blaszczak said the number could quickly be increased to 20,000 if a threat justified it.

US President Donald Trump has previously accused Germany of not contributing enough to Nato.

But the US move has raised concern among Nato allies worried over possible Russian expansionism.

The Enhanced Defence Co-operation Agreement (EDCA) was signed by Mr Pompeo and Mr Blaszczak in Warsaw on Saturday.

“This is going to be an extended guarantee – a guarantee that in case of a threat our soldiers are going to stand arm-in-arm,” Poland’s President Andrzej Duda said at the signing ceremony.

“It will also serve to increase the security of other countries in our part of Europe.”

About 4,500 US troops are currently stationed in Poland and another 1,000 will be added under the new pact. The headquarters of the US Army V Corps will also be relocated from Germany to Poland.

Last month the US confirmed that almost 12,000 troops – out of more than 38,000 – would be withdrawn from Germany in what it described as a “strategic” repositioning of its forces in Europe.

About 6,400 troops are being sent home with the rest moved to other Nato countries including Poland, Italy and Belgium.

President Trump said the move was a response to Germany failing to meet Nato targets on defence spending.

Billed by its advocates as a means to better defend Nato and strengthen deterrence against Moscow, this new military agreement could be as much about politics as it is about strategy.

The US already contributes to and commands a small multi-national Nato battlegroup in Poland, with regular exercises drawing in additional forces. A land-based ballistic missile defence system is under construction.

But since 2018 in particular, Polish politicians have been pushing for much more, at one stage arguing that a full US division should be permanently based in the country with Warsaw shouldering at least some of the cost; a plan dubbed by some as “Fort Trump”.

The new agreement falls well short of this. But it sends a clear signal about Mr Trump’s preferences. Muscular Poland, with relatively strong defence spending, is the sort of ally the president likes. By contrast he has already announced the pull-out of some US forces from Germany, which he believes does not carry its share of the defence burden.

It is not clear that the shifting around of forces will necessarily strengthen Nato at a time when many of its key problems seem to relate to internal cohesion.

“We don’t want to be the suckers any more,” Mr Trump told reporters shortly after the move was announced. “We’re reducing the force because they’re not paying their bills; it’s very simple.”

Mr Trump has long complained that European Nato members should spend more on their own defence and not rely so heavily on the US to shoulder the costs of maintaining the alliance.

The row between the allies focuses around the target agreed by all Nato members that defence spending should reach 2% of GDP (gross domestic product, the total value of goods produced and services provided in a country) by 2024.

Germany, along with other countries, has yet to meet this target.

German officials have criticised the US move, suggesting it could weaken Nato and embolden Russia.