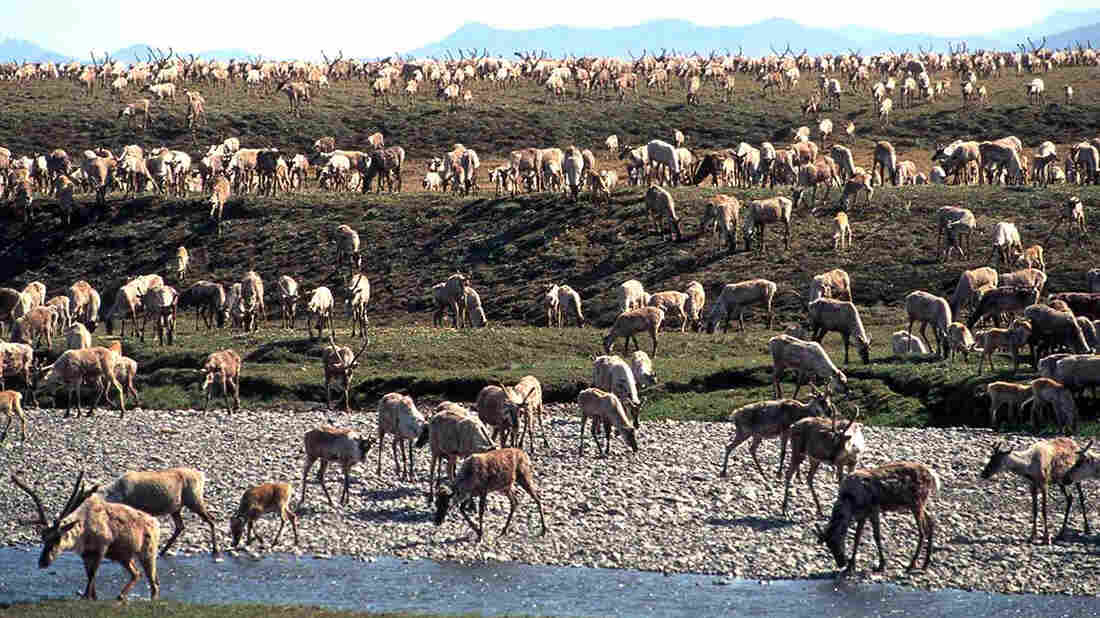 Caribou from the Porcupine caribou herd are seen migrating onto the coastal plain of the Arctic National Wildlife Refuge in northeast Alaska. The Interior Department hopes to conduct a lease sale for oil and gas drilling in the coastal plain by the end of 2020. U.S. Fish and Wildlife Service/AP hide caption

The Trump administration is pushing ahead with plans to allow drilling in the Arctic National Wildlife Refuge. The first leases to drill for oil and gas in the area could be sold by the end of 2020, Interior Department Secretary David Bernhardt said as his agency formally announced its leasing program on Monday.

Laying out the terms of a leasing program is one of the last steps in a controversial plan to tap into the gas and oil resources in the region that has been fought over for decades. It’s backed by Republicans and opposed by environmental groups and some members of Alaska’s Indigenous communities.

The move applies to some 1.57 million acres of the refuge’s coastal plain.

“I do believe there certainly could be a lease sale by the end of the year,” Bernhardt said, according to NPR member station Alaska Public Media.

Environmental groups have pledged to sue to stop the move. They said that once drilling rights are sold, it will be harder for a future president to reverse course.

The Natural Resources Defense Council and other groups said oil operations in the federally protected lands threaten the pristine landscape, which sustains caribou, polar bears, migratory birds and other animals.

“The Trump administration never stops pushing to drill in the Arctic Refuge — and we will never stop suing them,” said Gina McCarthy, president of the Natural Resources Defense Council. “America has safeguarded the refuge for decades, and we will not allow the administration to strip that protection away now.”

Alaska’s congressional delegation — Sens. Lisa Murkowski and Dan Sullivan, and Rep. Don Young, all Republicans — celebrated the news, thanking President Trump and Bernhardt for what they said will be a boost for their state’s economy.

“This is a capstone moment in our decades-long push to allow for the responsible development” of oil resources in the refuge, Murkowski said.

“As we approach the day where the first drilling rigs arrive and crude starts flowing, I will continue working with great excitement to ensure that Alaska is front and center as we blaze the trail toward American energy dominance,” Young said.

It’s not clear how much demand there will be for Arctic leases. The oil industry has been hit hard by the pandemic. It’s also not clear exactly how much oil is in the refuge, and a growing list of investors have responded to environmental concerns and said they won’t fund oil and gas projects there.

Sierra Club lobbyist Athan Manuel has been fighting to keep rigs out of the refuge for more than 20 years. He said the Trump administration is rushing to get at least one company to bid on leases before the end of Trump’s term and the possible arrival of a new president who opposes drilling.

“I think they just want to ram this down people’s throats to show that they can still drill where they want to drill and still prop up the oil industry, even in the face of evidence of climate change,” he said.

Wilderness Society’s Alaska state director, Karlin Itchoak, said in a statement that the move by the Trump administration “ignores science and shortcuts the public process in an irresponsible rush to help oil companies secure leases on the coastal plain before the 2020 presidential election.”

The coastal plain represents about 8% of the Arctic National Wildlife Refuge’s 19.3 million acres. It’s a place where caribou give birth and polar bears make their dens. Environmental groups call it the biological heart of a priceless ecosystem.

Once drilling rights are sold, it will be harder for a future president to reverse course. But Manual said the administration is making a fateful decision by not doing enough to protect polar bears.

“And so we have a lot of leverage in the courts under the Endangered Species Act, to push back aggressively, and that’s what we’re going to do. We’re not certainly giving up.”

The U.S. government made it legal to drill on the coastal plain in December 2017 when the Republican-led Congress added the stipulation to the Tax Cuts and Jobs Act.

“Interior must conduct at least two lease sales within 10 years,” the 2017 law states. It adds, “Each lease sale must contain: (1) at least 400,000 acres, and (2) areas that have the highest potential for the discovery of hydrocarbons.”

The law allows oil and gas companies to build production and support facilities on up to 2,000 acres of the coastal plain as part of their operations.

Drilling advocates such as Murkowski like to point out that the coastal plain is a relatively small area on the edge of a refuge the size of South Carolina. She is largely responsible for including oil development in the tax bill Congress passed in 2017.

Murkowski said oil development on Alaska’s North Slope is always done with utmost care for the wildlife and the land.

“The environmental safeguards are such that you can’t take exploration rigs out on the tundra in summer when it might leave a mark,” she said. “No, we wait until it’s the coldest, the darkest, the ground is frozen as far as it possibly can.”

The decision doesn’t set a date for the oil lease sale, but the interior secretary said it could happen soon.