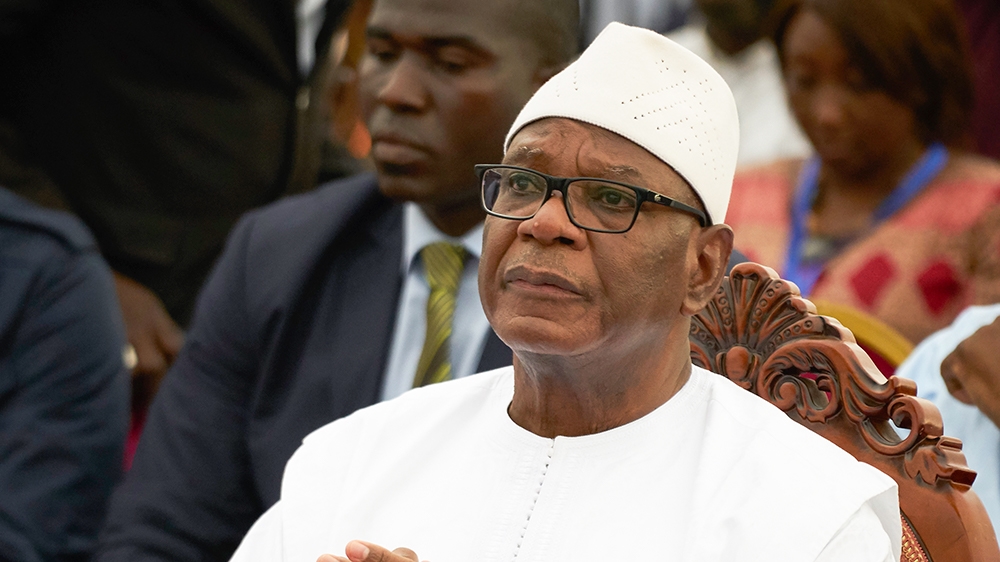 Mali’s President Ibrahim Boubacar Keita resigned hours after soldiers seized him from his home as part of a coup following months of mass protests against alleged corruption and worsening security in the West African country.

The news of Keita’s departure was met with jubilation by anti-government demonstrators on Wednesday, while leaders of the military coup said they would enact a political transition and stage elections within a “reasonable time”.

The soldiers behind the coup – calling themselves the National Committee for the Salvation of the People – appeared on state television in military fatigues, pledging to stabilise the country.

“We are not holding on to power but we are holding on to the stability of the country,” said Ismail Wague, Mali Air Force’s deputy chief of staff.

“With you, standing as one, we can restore this country to its former greatness,” said Wague, announcing borders were closed and a curfew was going into effect from 9pm to 5am.

“This will allow us to organise within an agreed reasonable timeframe, general elections to equip Mali with strong institutions, which are able to better manage our everyday lives and restore confidence between the government and the governed.”

‘Do I really have a choice?’

Keita announced he was stepping down in a brief address on national broadcaster ORTM at around midnight. Looking tired and wearing a surgical mask, the 75-year-old said his resignation – three years before his final term was due to end – was effective immediately.

He also declared the dissolution of his government and the National Assembly.

“If today, certain elements of our armed forces want this to end through their intervention, do I really have a choice?” Keita said from a military base in Kati outside the capital Bamako where he and his Prime Minister Boubou Cisse had been detained earlier in the day.

“I wish no blood to be shed to keep me in power,” he said. “I have decided to step down from office.”

There was no immediate comment from Mali’s opposition leaders, but on Tuesday the M5-RFP coalition behind the mass protests signalled support for the mutineers’ action, with spokesman Nouhoum Togo telling the Reuters news agency it was “not a military coup but a popular insurrection”.

Regional bloc ECOWAS denounced “the overthrow by putschist soldiers of the democratically elected government” and ordered the closing of regional borders with Mali as well as the suspension of all financial flows between Mali and its 15 members states.

In the capital, anti-government protesters who first took to the streets in June to demand the president’s resignation, cheered the soldiers’ actions.

“All the Malian people are tired – we have had enough,” one demonstrator said.

Mohamed Ag Hamaleck, a Bamako-based journalist, told Al Jazeera there was excitement and apprehension in the capital following Keita’s announcement.

“Some people were sad to see Keita leave in this manner,” he told Al Jazeera. “We don’t know who’s in charge … We don’t have a government, we don’t have a national assembly.”

The political upheaval unfolded months after disputed legislative elections, and came as support for Keita tumbled amid criticism of his government’s handling of a spiralling security situation in the northern and central regions that has entangled regional and international governments, as well as a United Nations mission.

The downfall of Keita, who was first elected in 2013 and returned to office five years later, closely mirrors that of his predecessor. Amadou Toumani Toure was forced out of the presidency in a coup in 2012 after a series of punishing military defeats. That time, the attacks were carried out by ethnic Tuareg separatist rebels.

The 2012 coup, which also erupted at the same Kati military camp, hastened the fall of Mali’s north to armed groups, some of them linked to al-Qaeda.

Ultimately, a French-led military operation overthrew the fighters, but they merely regrouped and expanded their reach into central Mali during Keita’s presidency. And at times, Mali’s military has seemed powerless to stop the fighters, some of them now also affiliated with the ISIL (ISIS) armed group.

The violence, in which the armed groups have stoked ethnic tensions while jockeying for power, has spilled into the neighbouring countries of Niger and Burkina Faso, destabilising the wider Sahel region and creating a massive humanitarian crisis.

Also in March, unidentified gunmen abducted Mali’s main opposition leader, Soumaila Cisse, as he campaigned in the country’s volatile centre. He has not been heard from since.

As the tensions mounted, anxiety has also grown in Mali in recent weeks about another military-led change of power in Mali, particularly after regional mediators from ECOWAS failed to bridge the impasse between Keita’s government and opposition leaders.

Keita tried to meet protesters’ demands through a series of concessions, and even said he was open to redoing disputed legislative elections. But those overtures were swiftly rejected by opposition leaders who said they would not stop short of Keita’s resignation.

Then on Tuesday, soldiers in Kati took weapons from the armoury at the barracks and detained senior military officers. Anti-government protesters immediately cheered the soldiers’ actions, and some set fire to a building that belongs to Mali’s justice minister in the capital.

Prime Minister Cisse urged the soldiers to put down their arms.

“There is no problem whose solution cannot be found through dialogue,” he said in a statement.

But the wheels were already in motion – armed men began detaining people in Bamako too, including Keita, Cisse and the country’s finance minister, Abdoulaye Daffe.

William Lawrence, professor of political science at the American University in the United States, expressed concern over the potential for more chaos in Mali.

“Mali has three overlapping sets of problems,” he told Al Jazeera. “There’s a severe political crisis that grew out of the botched March 2020 elections. There’s a severe economic crisis, complicated by the COVID-19 pandemic and there’s a severe security crisis which has led to the arrest of one of the major opposition leaders, held by terrorists in the North. There is lots of grievances about the failure to contain terrorism, but also the actions of the military against civilians.”

And while the opposition was united in their demand for Keita’s resignation, “there is not very much consensus on what to do next or who should represent Malians,” Lawrence said.

In addition to ECOWAS, Tuesday’s developments were condemned by the African Union, the US, the UN, and France.

UN Secretary-General Antonio Guterres sought “the immediate restoration of constitutional order and rule of law”, according to his spokesman.

The UN Security Council scheduled a closed meeting Wednesday afternoon to discuss the unfolding situation in Mali, where the UN has a 15,600-strong peacekeeping mission.

Moussa Faki Mahamat, chairman of the AU, said he “energetically” condemned Keita and Cisse’s arrest and called “for their immediate liberation”.

French Foreign Minister Jean-Yves Le Drian said France “condemns in the strongest terms this grave event”. J Peter Pham, the US envoy to the Sahel, said on Twitter the US was “opposed to all extra-constitutional changes of government”.