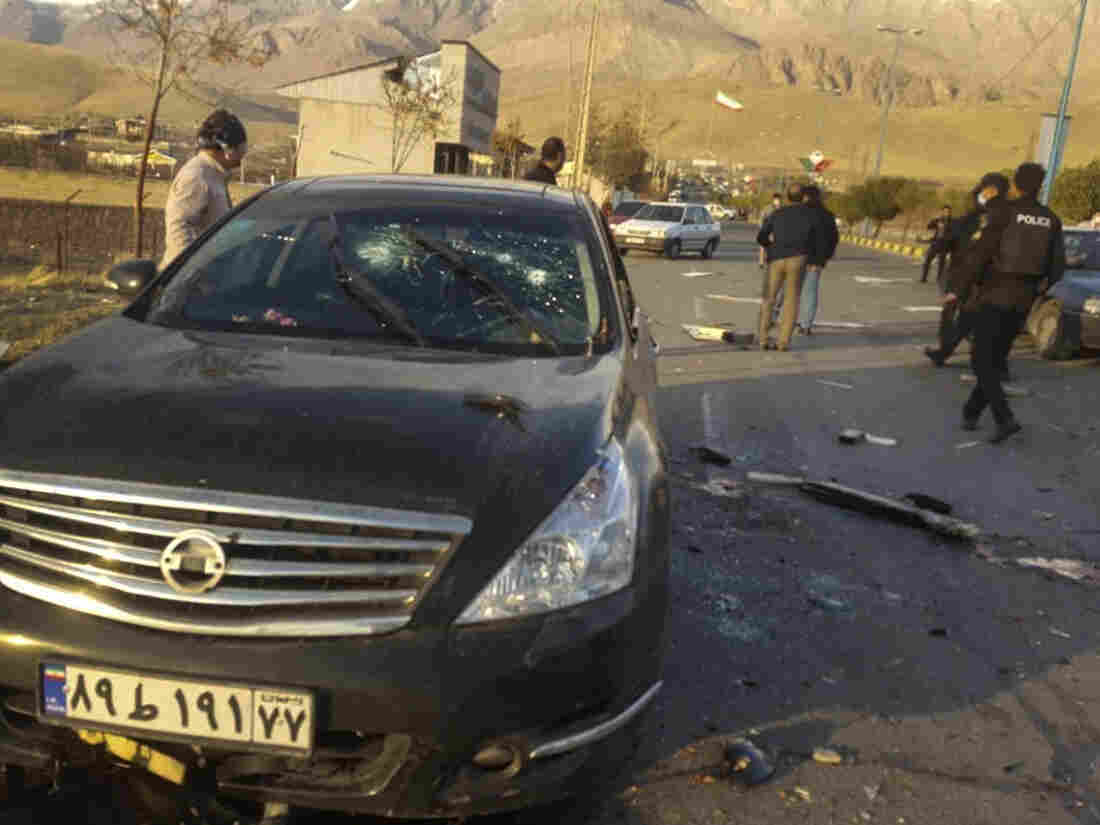 This photo released by the semiofficial Fars News Agency shows the scene where Mohsen Fakhrizadeh was reportedly killed in Absard, a small city just east of Tehran, Iran, on Friday. Fakhrizadeh, an Iranian scientist that Israel alleged led the Islamic Republic’s military nuclear program until its disbanding in the early 2000s, was “assassinated” Friday, state television said. Fars News Agency via AP

A top Iranian scientist believed to be responsible for developing the country’s military nuclear program has been killed, Iranian state television said Friday.

Mohsen Fakhrizadeh was killed while in a car just outside the capital of Tehran by attackers using explosives and machine guns, the state media said, describing the assailants as “armed terrorist elements.”

The scientist was rushed to a local hospital where doctors were unable to revive him. Iran’s defense minister has confirmed his death, Iran’s Fars News Agency reported.

No one immediately claimed responsibility for the attack, but some Iranian officials said they believe Israel played a role.

The Israeli government had no immediate comment on Fakhrizadeh’s killing.

“Remember that name, Fakhrizadeh,” he said, while announcing that the Israeli spy agency Mossad had stolen documents from Iran about its covert nuclear activities.

Fakhrizadeh, a professor of physics at Imam Hussein University in Tehran, was the former head of Iran’s Physics Research Center.

The U.S. State Department and Pentagon declined to comment.

But a senior U.S. official speaking on condition of anonymity said the killing has raised concerns of blowback from Iran against U.S. forces in the region, especially in Iraq, where U.S. forces already have faced attacks from Iranian-backed militias.

It’s not the first time Fakhrizadeh faced an attempt on his life. Israeli intelligence affairs journalist Yossi Melman reported that the Iranian scientist escaped an attempted assassination a few years ago.

In addition to Fakhrizadeh’s work as a physics professor, “he also led the clandestine Amad plan checking the feasibility of a nuclear bomb” and “led its weaponization efforts,” Melman wrote in a tweet retweeted by President Trump. “He was head of Iran’s secret military program and wanted for many years by Mossad.”

The U.S. Departments of State and Treasury started sanctioning Fakhrizadeh in 2008, blocking him from interacting with the U.S. financial system. The U.S. has publicly stated that Fakhrizadeh was the leader of Iran’s nuclear research program.

The killing could lead to reprisal by Iranian forces. When President Trump this month raised the possibility of attacking Iran to disable its nuclear program, U.S. military and other senior officials pushed back, warning of potential retaliation against U.S. troops in the region.

Still, Israeli Defense Forces allegedly were instructed in recent weeks to prepare for the possibility that the U.S. would strike Iran before Trump leaves office, Axios reported Wednesday. This belief wasn’t based on specific intelligence, but was due to the anticipation of a “very sensitive period” while Trump is still commander in chief, Axios said, citing senior Israeli officials.

Trita Parsi, founder of the National Iranian American Council, said in a series of tweets that Israel is a “prime suspect” in the attack because it has the expertise and motivation to do.

“Conducting attacks in Iran has few down-sides for Israel right now,” said Parsi, who has written extensively on the relationship between Iran, Israel and the U.S. “Either Iran lashes out and sparks a broader conflict that sucks in the US, bringing about a US-Iran confrontation that Netanyahu long has sought.”

The assassination is likely to complicate any Biden administration attempt to revive diplomacy with Iran, Parsi said.

Iranian officials have already promised the country would retaliate against the perpetrators, which they currently perceive to be Israel.

“In the last days of their gambling ally’s political life, the Zionists seek to intensify and increase pressure on Iran to wage a full-blown war,” said Hossein Dehghan, an adviser to Iran’s supreme leader, according to The Associated Press. “We will descend like lightning on the killers of this oppressed martyr and we will make them regret their actions!”