Iran’s powerful Revolutionary Guard vowed Saturday there would be dangerous consequences for the United Arab Emirates after it announced a historic deal with Israel to open up diplomatic relations.

The UAE is the first Gulf Arab state to do so and only the third Arab nation to establish normalized relations with Israel, Iran’s regional archenemy.

The Iranian Guard called the deal a “shameful” agreement and an “evil action” that was underwritten by the U.S., according to the group’s statement on a website it runs, Sepah News. It warned that the deal will set back American influence in the Middle East, and bring a “dangerous future” for the Emirati government.

Iranian president Hassan Rouhani has also condemned the Emirati move. In a televised speech Saturday, he warned that the United Arab Emirates has made a “huge mistake” in reaching a deal toward normalizing ties with Israel. He warned the Gulf state against allowing Israel to have a “foothold in the region.”

Iran’s foreign minister, Mohammad Javad Zarif, called the agreement a painful betrayal of Arab and other countries in the region, during a trip to Lebanon on Friday. 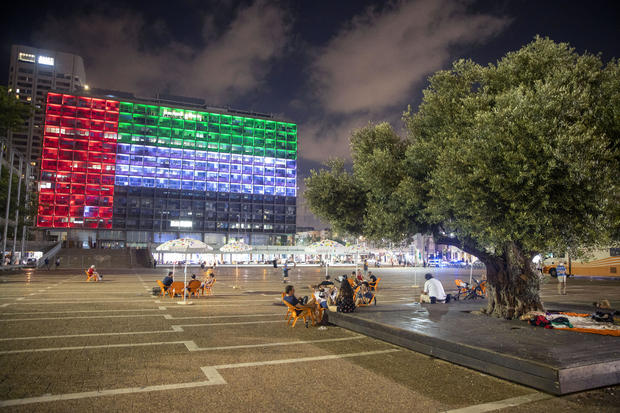 Tel Aviv City Hall is lit up with the flags of the United Arab Emirates and Israel as the countries announced they would be establishing full diplomatic ties, in Tel Aviv, Israel, on August 13, 2020. Oded Balilty/AP

President Donald Trump announced Thursday that the United Arab Emirates and Israel agreed to establish full diplomatic ties as part of a deal to halt the annexation of occupied land sought by the Palestinians for their future state.

The UAE presented its controversial decision as a way of encouraging peace efforts and taking Israel’s planned annexation of parts of the occupied West Bank off the table. But Israeli Prime Minister Benjamin Netanyahu swiftly pushed back insisting the pause in annexation was “temporary.”

Mr. Trump has presented the U.S.-brokered agreement as a major diplomatic achievement and said he expects more Arab and Muslim countries to follow suit. Israel has quietly cultivated ties with the UAE and other Gulf countries for several years as they have confronted a shared enemy in Iran.