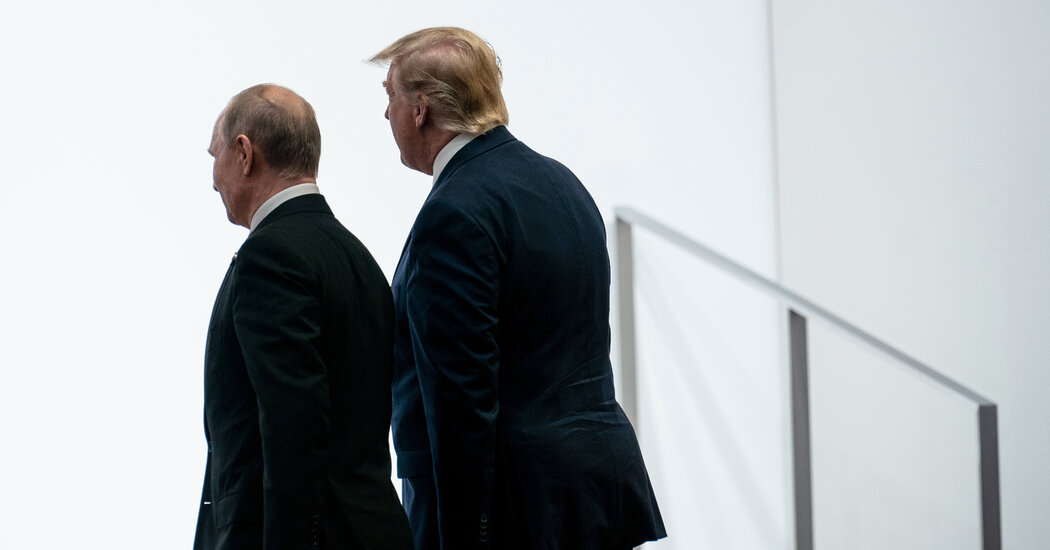 WASHINGTON — A sprawling report released Tuesday by a Republican-controlled Senate panel that spent three years investigating Russia’s 2016 election interference laid out an extensive web of contacts between Trump campaign advisers and Russian government officials and other Russians, including some with ties to the country’s intelligence services.

The report by the Senate Intelligence Committee, totaling nearly 1,000 pages, provided a bipartisan Senate imprimatur for an extraordinary set of facts: The Russian government undertook an extensive campaign to try to sabotage the 2016 American election to help Mr. Trump become president, and some members of Mr. Trump’s circle of advisers were open to the help from an American adversary.

The report drew to a close one of the highest-profile congressional inquiries in recent memory, one that the president and his allies have long tried to discredit as part of a “witch hunt” designed to undermine the legitimacy of Mr. Trump’s stunning election nearly four years ago.

Like the investigation led by the special counsel, Robert S. Mueller III, who released his findings in April 2019, the Senate report did not conclude that the Trump campaign engaged in a coordinated conspiracy with the Russian government — a fact that Republicans seized on to argue that there was “no collusion.”

But the report showed extensive evidence of contacts between Trump campaign advisers and people tied to the Kremlin — including a longstanding associate of the onetime Trump campaign chairman Paul Manafort, Konstantin V. Kilimnik, whom the report identifies as a “Russian intelligence officer.”

The Senate report for the first time identified Mr. Kilimnik as an intelligence officer. Mr. Mueller’s report had labeled him as someone with ties to Russian intelligence.

Democrats highlighted those ties in their own appendix to the report, noting that Mr. Manafort discussed campaign strategy and shared internal campaign polling data with Mr. Kilimnik, and later lied to federal investigators about his actions.

“The committee obtained some information suggesting that the Russian intelligence officer, with whom Manafort had a longstanding relationship, may have been connected to the G.R.U.’s hack-and-leak operation targeting the 2016 U.S. election,” Democrats wrote. “This is what collusion looks like.”

The assertion was a sign that even though the investigation was carried out in bipartisan fashion, and Republican and Democratic senators reached broad agreement on its most significant conclusions, a partisan divide remained on some of the most politically sensitive issues.

The Senate report said that the unusual nature of the Trump campaign — staffed by Mr. Trump’s longtime associates, friends and other businessmen with no government experience — “presented attractive targets for foreign influence, creating notable counterintelligence vulnerabilities.”

The Senate investigation found that two other people who met at Trump Tower in 2016 with senior members of the Trump campaign — including Mr. Manafort; Jared Kushner, the president’s son-in-law; and Donald Trump Jr., the president’s eldest son — had “significant connections to Russian government, including the Russian intelligence services.”

The report said that the connections between the Russian government and one of the individuals, Natalia V. Veselnitskaya, “were far more extensive and concerning than what had been publicly known.”

Since the release of Mr. Mueller’s report, Attorney General William P. Barr and numerous Republican senators have tried to discredit the special counsel’s work — dismissing the investigation into the 2016 election as “Russiagate.”

Releasing the report less than 100 days before Election Day, lawmakers hope it will refocus attention on the interference by Russia and other hostile foreign powers in the American political process, which has continued unabated.

The report is the product of one of the few congressional investigations in recent memory that retained bipartisan support throughout. Lawmakers and committee aides interviewed more than 200 witnesses and reviewed hundreds of thousands of documents, including intelligence reports, internal F.B.I. notes and correspondence among members of the Trump campaign. The committee convened blockbuster hearings in 2017 and 2018, but much of its work took place in a secure office suite out of public view.

Portions of the report containing classified or other sensitive information were blacked out.

The Intelligence Committee released four previous volumes on its findings over the past year. The first focused on election security and Russia’s attempts to test American election infrastructure, and included policy recommendations to blunt future attacks. The second provided a detailed picture of Russia’s use of social media to sow political divisions in the United States.

Lawmakers then produced a study of the response by the Obama administration and Congress in the highly partisan run-up to the 2016 election. Most recently, they found that a 2017 intelligence community assessment, assigning blame to Russia and outlining its goals to undercut American democracy, had been untainted by politics and was fundamentally sound despite attacks on it by Mr. Trump’s allies.

The committee focused its work on intelligence and counterintelligence matters. It did not investigate attempts by Mr. Trump to hinder the work of federal investigators.

The report arrived in a fraught political moment, particularly for Republican senators on the panel who signed off on it and thus may find themselves at odds with Mr. Trump and other influential figures in their party. Since Mr. Mueller finished his work, Republicans close to Mr. Trump have sought to recast the president as the victim of politically motivated national security officials in the Obama administration.

The Justice Department’s independent inspector general has found that law enforcement officials had sufficient basis to open the Russia investigation and acted without political bias.

But two other Senate panels, the Judiciary and the Homeland Security and Governmental Affairs Committees, are conducting investigations premised on picking apart aspects of the special counsel’s inquiry. And though they have not disputed Russia’s interference, they have decidedly turned the party’s focus away from the actions of a hostile foreign power toward the workings of the investigation it spawned, arguing that Mr. Mueller should never have been appointed and that the F.B.I. should have dropped any inquiry involving the Trump campaign long before he was.

The Justice Department is doing a similar post-mortem. Mr. Barr told a congressional committee last month that he was determined “to get to the bottom of the grave abuses involved in the bogus ‘Russiagate’ scandal.” He has appointed a criminal prosecutor, John H. Durham, to review the investigation and the actions of intelligence and law enforcement officials trying in 2016 to understand the Kremlin’s interference and possible links to Trump associates.

Much of the Intelligence Committee investigation was overseen by Senator Richard M. Burr, Republican of North Carolina, but he temporarily stepped aside as the chairman of the panel in May because of a federal investigation into a rush of stock sales he made before the coronavirus pandemic began rattling the United States. As they watched a similar House investigation over Russian interference splinter under partisan bickering and Mr. Trump attacked Mr. Mueller, Mr. Burr and Senator Mark Warner of Virginia, the top Democrat on the panel, worked steadily to ensure they could come to an authoritative bipartisan conclusion. Mr. Burr voted to endorse the final conclusions.

The findings broadly echo Mr. Mueller’s conclusions. His report documented attempts by Moscow to undermine confidence in the electoral process and sway the election toward Mr. Trump by hacking and dumping Democratic emails and engaging in sophisticated manipulation campaigns using social media.

After years of work, Mr. Mueller found dozens of contacts between Trump associates and Russian-connected actors, evidence that the Trump campaign welcomed the Kremlin’s attempts to sabotage the election and “expected it would benefit electorally” from the hacking and dumping of Democratic emails.

New York Times reporters are combing through the report for the most important developments. Check back for updates.