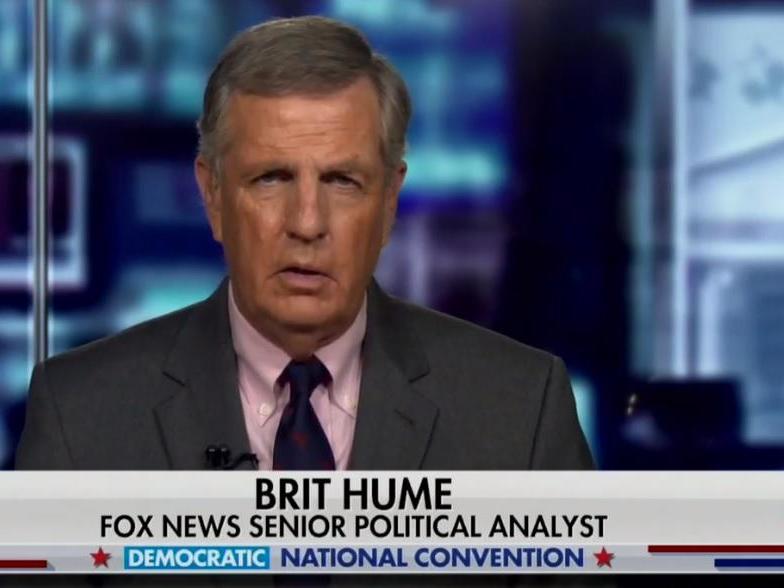 A Fox News analyst praised Jill Biden for her DNC speech on Tuesday, before immediately criticising what he described as Michelle Obama‘s “hard” and “angry” approach the previous night.

Appearing on the network’s roundup of events on day two of the convention, political analyst Brit Hume gave his take on Ms Biden’s speech, in which she made the case for her husband, Joe, to become president.

“I think this speech tonight by Jill Biden was tremendously effective,” Mr Hume said of the potential first lady’s address. “In the sense that it didn’t have a hard angry edge that we heard last night, to a considerable extent, from Michelle Obama,” he added.

“She highlighted things about Joe Biden’s character and temperament, that were touched on by others, which are real, and which members of both parties have recognised in him for a long time, he’s a very decent guy.”

Ms Biden had spoken about how her husband had overcome the death of his first wife, Neilia, and youngest daughter, Naomi, both of whom were killed in a car crash in 1972.

Ms Biden also spoke about her husband’s ability to make friends, and his willingness to set aside political rivalries to get business done – all qualities which she said made him fit for office.

Ms Obama said Trump was “in over his head” and “the wrong president for our country”, in a blistering personal attack.

Tuesday’s DNC also heard from former president Bill Clinton, who was also highly critical of the president and called out his handling of the Covid-19 pandemic.

Mr Clinton also attacked Mr Trump’s record on the economy as the president seeks to position himself as the “jobs” candidate.

“Donald Trump says we’re leading the world. Well, we are the only major industrial economy to have its unemployment rate triple,” said Mr Clinton.

“At a time like this, the Oval Office should be a command centre. Instead, it’s a storm centre. There’s only chaos,” he added.

“Just one thing never changes – his determination to deny responsibility and shift the blame. The buck never stops there.”

Day three of the DNC will feature speeches from former secretary of state, Hillary Clinton, and House speaker, Nancy Pelosi.