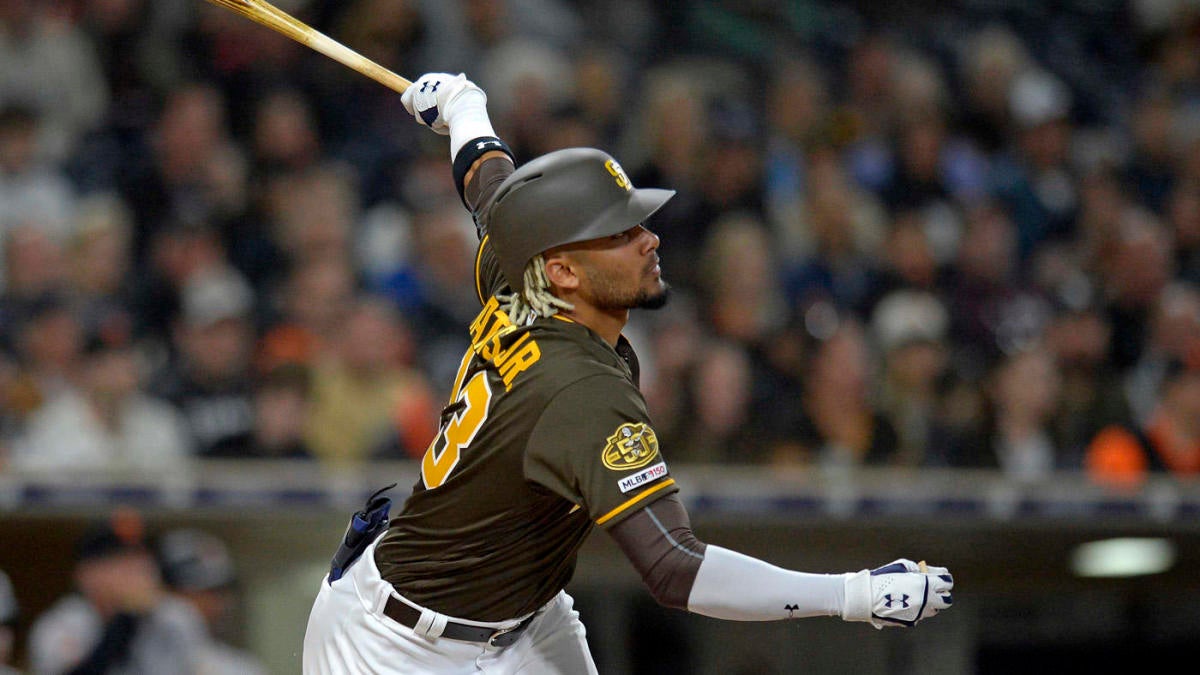 Here’s the grand slam, Tatis’ 11th homer of the year:

The homer, which came off a 3-0 pitch from Juan Nicasio, angered the Rangers and led to a sequence of events, including Texas manager Chris Woodward citing the “unwritten rules” of baseball in disapproval. “There’s a lot of unwritten rules that are constantly being challenged in today’s game,” Woodward told reporters after the game.

“I didn’t like it, personally. You’re up by seven in the eighth inning; it’s typically not a good time to swing 3-0. It’s kind of the way we were all raised in the game. But, like I said, the norms are being challenged on a daily basis. So just because I don’t like it doesn’t mean it’s not right. I don’t think we liked it as a group.”

Tatis’ eighth-inning homer came with the Padres up 10-3 with the bases loaded, and of course, on a 3-0 count. Prior to giving up the grand slam, Nicasio had walked two batters and gone to a 3-0 count on three straight batters. Tatis was the fourth straight batter to get to three balls.

After the homer, Nicasio was replaced by Ian Gibaut. The first pitch from Gibault was a 93 mph fastball behind Manny Machado. Monday night’s umpires immediately gathered to discuss the incident, but no warnings or ejections were handed out.

After the game, Padres manager Jayce Tingler said that Tatis missed a take sign during his at-bat.

“He’s young, a free spirit and focused and all those things,” Tingler told reporters. “That’s the last thing that we’ll ever take away. It’s a learning opportunity and that’s it. He’ll grow from it.”

It’s worth noting Tingler spent the previous 13 years as a coach for the Rangers, including last season on the staff of then-rookie manager Woodward.

“Just so you know, a lot of our guys have green light 3-0,” Tingler added. “But in this game in particular, we had a little bit of a comfortable lead. We’re not trying to run up the score or anything like that.”

Tatis’ teammate, Padres right-hander Zach Davies, however took the opposite direction of his manager and publicly defended Tatis.

“A lot of guys talk about unwritten rules of baseball, but you’re in the heat of the moment, you’re gonna try to get your pitch as a hitter and he didn’t miss,” Davies told The Athletic.

“So you can’t really fault him for that, in my opinion. Some guys feel differently, but everybody has their own opinion on it. Make sure your 3-0 pitch is a little bit better. I’ve been hit on 3-0 and homers have been hit off me, maybe not in the same situation, but that’s something that everybody kind of has a little bit different opinion on.”

And, Tatis, himself — one of the most electric talents in baseball right now — took the high road when addressing the homer in his postgame press conference.

“I’ve been in this game since I was a kid, and I know a lot of unwritten rules,” Tatis said after the game. “And this time, I was kind of lost on this one. From those experiences, you have to learn. Probably next time, I’ll take a pitch. I love this game and I respect this game a lot. Every time I go out there, I just want to feel respect for everybody else. This game is hard for everyone, so why not just celebrate and have fun the way you wanna have fun?”