A former Republican congresswoman who is expected to speak Monday night at the Democratic National Convention once led a major Washington firm that lobbied for Russia —and even reached out to then-Sen. Joe Biden’s staff as part of that work.

Former GOP Rep. Susan Molinari represented Staten Island for three terms until she left Congress in 1997. Shortly after her retirement, she joined the Washington Group as president and chief executive in 2001.

Several years later, though, in 2007, the Washington Group became part of a contract with global public relations firm Ketchum in representing Russia, which was later revealed to be worth $7.5 million, according to a 2009 report from The New Republic.

The Hill reported that much of the Washington Group’s lobbying at the time was in regard to Russia’s energy policy, as well as its status with the World Trade Organization. 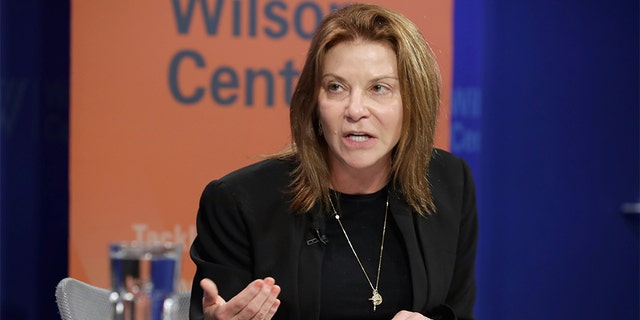 Then-Google Vice President of Public Policy Susan Molinari participates in a discussion on Zika at the Woodrow Wilson Center May 24, 2016 in Washington, D.C. (Photo by Chip Somodevilla/Getty Images)

As part of that work, the Washington Group had contact with the office of the chairman of the Senate Foreign Relations Committee, who, at the time, was Joe Biden.

The Hill, in 2008, reported specifically that Molinari herself contacted aides to Biden, as well as the top Republican on the House Foreign Affairs Committee, who, at the time was Rep. Ileana Ros-Lehtinen, R-Fla., during the military conflict between Russia and the country of Georgia.

There is no indication, however, that Biden or his aides did anything improper with regard to that outreach or Russia.

In fact, Biden at the time traveled to Georgia and, upon return to the U.S., called for $1 billion in emergency aid for the country to “rebuild” and “preserve its democratic institutions.”

WHAT TO WATCH FOR MONDAY AT THE DEMOCRATIC CONVENTION

Molinari, who went on to work for Google, is included in the Democratic convention lineup Monday night as one of several Republicans speaking in support of now-presumptive presidential nominee Joe Biden, alongside former Republican Ohio Gov. John Kasich and former Republican New Jersey Gov. Christine Todd Whitman, among others.

Molinari’s remarks are expected to fall under the convention’s “Putting Country over Party” theme.

While she was with the firm, the Washington Group faced scrutiny for its business relationship with Russia — a country that Democrats have slammed ever since 2016 for pro-Trump election meddling that is thought to be continuing to this day.

Molinari, in 2015, told Politico that the firm eventually limited their relationship with Russia to lobbying for membership in the World Trade Organization.

“Tonight’s theme at the Democrat convention is ‘country over party’ and they’ve actually chosen a headline speaker who was a registered lobbyist for Russia,” Trump 2020 press secretary Hogan Gidley told Fox News on Monday. “I’m not sure what’s worse, the sheer ignorance of this decision or the fact that Democrats are proud of it.”

Gidley added: “Either way, it just highlights a half-century of Joe Biden’s failures in elected office and his consistent refusal to put America first.”

The Daily Beast reported that there also could be surprise speakers at the convention.

Molinari gave the keynote speech at the GOP’s 1996 convention.