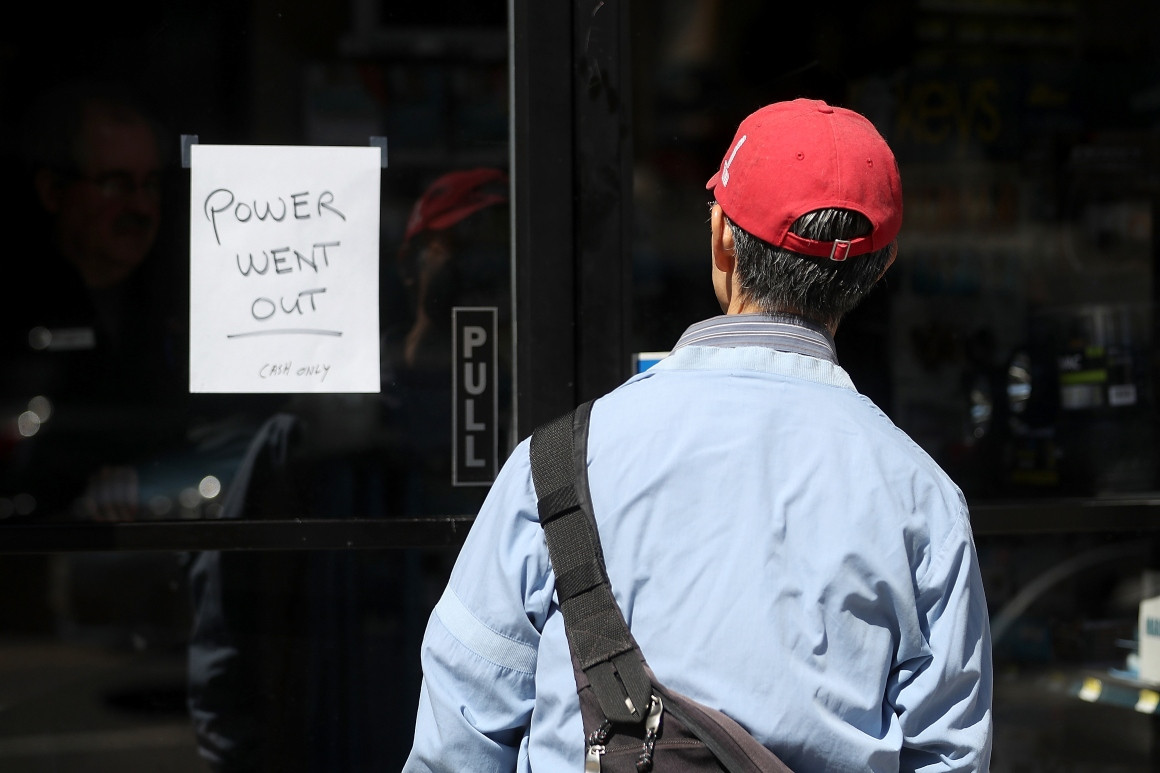 A pedestrian looks at a sign posted on the door of a hardware store during a citywide power outage in San Francisco, Calif. | Justin Sullivan/Getty Images

SACRAMENTO — The exact root of California’s rolling blackouts is still unclear as more power outages loom, and that’s allowed everyone to point fingers.

Energy experts Monday cited a litany of potential causes for the rotating outages that affected hundreds of thousands of California residents Friday and Saturday nights: ballooning demand, inadequate transmission, an overreliance on renewable energy and the incursion of new energy providers that don’t have the same obligation to maintain reserves as traditional utilities do.

While California braced for another round of rolling blackouts Monday night, the state’s grid operator held off for a second straight night, citing cooler than expected weather and widespread conservation. It also came as Gov. Gavin Newsom questioned all of the state’s electricity players about why the outages occurred and faced blowback from frustrated residents.

California has endured planned blackouts in recent years as a wildfire prevention measure. But it was the Golden State’s first round of rolling blackouts related to supply since 2001, when Enron and other energy traders manipulated California’s market.

Earlier Monday, the California Independent System Operator blamed Friday’s outages on “high heat and increased electricity demand.” Yet some energy experts noted that demand wasn’t particularly higher than normal, as is typical for weekends, and CAISO had predicted it would have adequate reserves on hand for the 80 percent of California’s grid that it manages.

“What’s weird about what happened is they were adequate until they weren’t,” said Michael Wara, director of Stanford University’s climate and energy program and a member of the state’s Catastrophic Wildfire Cost and Recovery Commission. “It seems as if certain power plants for some reason were not able to deliver on the commitments to supply reserves and also supply energy.”

Because the Friday outage started around 6:30 p.m., when solar is ramping down and gas-fired plants are ramping up, gas is the likely immediate culprit, Wara said. “The timing of all this strongly suggests problems with gas plants,” he said.

California could raise maximum wholesale prices or increase penalties for non-performance as a way to encourage plant maintenance, he said.

CAISO CEO Steve Berberich said Monday that a power plant of unspecified fuel and size on Friday “tripped,” which caused the facility to go offline. While the details weren’t revealed, certain types of natural gas power plants can struggle under hot conditions, and gas units are typically the only ones with that much capacity.

Business groups, in turn, were quick to pin the blame on renewable energy suppliers; Saturday’s outage happened after 1,000 megawatts of wind power and a 470-megawatt gas plant briefly went offline.

“Hot weather and a cloudy day should not be able to shut down the fifth-largest economy in the world,” Lance Hastings, president of the California Manufacturers and Technology Association, said in a statement. “While we support California’s renewable energy goals, we absolutely need system redundancy that allows us to continue to operate and manufacture products for our residents and the world.”

Others were more explicit about their support for gas, including an executive at NRG, an owner of gas plants and other energy resources in states across the country — including 4,000 megawatts of gas and solar in California.

Travis Kavulla, a former member of CAISO’s western energy market governing body and NRG’s vice president of regulatory affairs, said the ability of gas to consistently provide power around the clock “proves the point that, at least for now, it’s an essential resource.”

Also playing the blame game: Berberich, who said renewables aren’t to blame, but that CAISO has been warning for several years that the PUC hasn’t required utilities to have enough reserves ready for extreme events.

Meanwhile, PUC spokesperson Terrie Prosper suggested CAISO mismanaged the situation. She said neither investor-owned utilities nor community choice aggregators were at fault. Both “procured the resources that were required to meet the forecasts,” she said. “The question we’re tackling is why certain resources were not available.”

And former PUC President Loretta Lynch, who served as the agency’s president during the 2000-01 electricity crisis, slammed CAISO on Monday for not being transparent about what ultimately led to the rolling blackouts. She argued that utilities did have enough capacity, including reserves, to meet demand. Lynch and Kavulla both said not all CAISO data is archived, leading observers to screenshot pricing and other webpages for preservation.

CAISO is the ultimate decisionmaker on matters of running the grids of investor-owned utilities, as the operator has visibility into their combined infrastructure and how electrons are transported throughout California and across state lines. CAISO is one of several independent system operators and regional transmission organizations across the country, which follow reliability standards set by a nonprofit governing body related to reserve margins and other criteria.

“The ISO doesn’t know how to manage the grid. They can’t keep the lights on when there’s plenty of power,” Lynch said. She suspected that like during the Enron-driven crisis of her day, so-called electricity “schedulers” — or middlemen between utilities and generators — don’t always submit accurate logs of when and how much electricity will be delivered, which has sometimes resulted in market manipulation. In an extreme example, Enron traders in the late 1990s and early 2000s forced plants offline and created artificial supply shortages.

“What about the grid operator doing its job and running a market that doesn’t get manipulated, running a grid that doesn’t get blacked out because they won’t call on the reserves? The question is, why didn’t they?” Lynch asked. She said investigations directed by Newsom on Monday of CAISO and the state’s energy agencies should be conducted by an entity independent of market players with subpoena power to fully publicize the grid operator’s data.

A renewables advocate said the PUC should be doing more to promote voluntary conservation programs, which he said have fallen by half over the last five years.

“I don’t think we know enough about all the details, but we do know what we have is a shortage of demand response — that is a direct PUC responsibility — and a shortage of new procurement, which is on them,” said V. John White, executive director of the Center for Energy Efficiency and Renewable Technologies.

The head of a trade group representing all types of generators pointed to multiple factors, including the general issue of solar’s intermittency, but also concurrent heat waves across the West that prevented California from importing power.

“There’s just less energy in the system to divvy up amongst the different regions,” said Jan Smutny-Jones, CEO of the Independent Energy Producers Association. “That’s not normally a problem, but when it’s hot then it is.”

One of the casualties of California’s last round of rolling blackouts said Newsom needs to prioritize reliability but that he doesn’t have to sacrifice the state’s clean-energy goals. He could boost energy storage, for example, in addition to keeping gas-fired peaker plants.

“The bottom line is, people don’t want lights to go down,” said former Gov. Gray Davis. “People also want a carbon-free future. Sometimes those two aspirations come into conflict. A smarter approach, in my judgment, is to have the power you need in reserve, even if it’s somewhat carbon-based, to keep the lights on.”

Newsom launched an inquiry Monday and avoided pointing the finger at any one factor in particular, pledging to continue pursuing the state’s low-carbon goals while improving reliability.

“We are not backing off on that commitment; quite the contrary,” he said. “But in the process of the transition, in the process of shutting down, understandably, the desire and need to shut down polluting gas plants, in a desire to go from the old to the new in that transition, and the need to shut those down, comes the need to have more insurance.”

Still, a political strategist who advised former Davis in his handling of the 2000-01 energy crisis said he should ramp up his rhetoric against the oft-blamed Pacific Gas & Electric, despite the lack of any evidence the utility played a role in the weekend’s outages.

PG&E emphasized over the weekend that the shutoffs were at the direction of CAISO, and took pains to distinguish them from wildfire-related shutoffs. “These outages are not Public Safety Power Shutoffs, which are called during specific high fire threat conditions, and they are not related to any issues with PG&E’s equipment or its ability to deliver energy locally,” the company said in a statement.

“I’ve seen this movie before, and I just think Newsom has to continue to talk about how we restructure that delivery system up in the PG&E territory,” said Garry South, who was Davis’ political adviser. “One of the ways he buys himself some time on this is by going back to the theme that PG&E is a proven bad player and the state has to seriously consider what we do with that utility and what we do in that service area to protect consumers and, frankly, protect people’s lives.”

This article tagged under: