“I was at my office, and I just sat there as my phone was going crazy, and I started to cry,” Cuthbert told CNN of the moment it sank in that Michelle Obama was wearing her design — a gold necklace with the letters V-O-T-E — while giving her Democratic National Convention speech.
The necklace is Cuthbert’s creation, part of her small, boutique jewelry line, based in Los Angeles, called BYCHARI. Since 2012, she has designed and produced custom pieces, with website orders coming mostly via word of mouth, social media and a handful of A-list influencers who support her mission.
The business was already picking up steam and Cuthbert had increased her staff, from two to five and now eight. But a visual endorsement from a style icon like the former first lady has skyrocketed sales. Cuthbert said that about 12 hours after Obama’s speech on Monday night, orders for the VOTE necklace, which retails for approximately $300, were already hovering near 2,000. 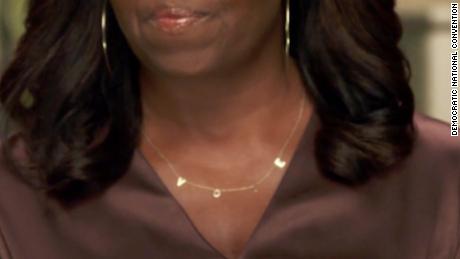 She noted that each piece is custom-made, with production turnaround time typically about three to four weeks, but she made “frantic” calls late last night to some of her suppliers in anticipation of the rush of orders, and she’s hoping she and her small team can start to turn necklaces as quickly as two weeks.
On Tuesday morning a dedicated page appeared on the BYCHARI website for ordering the VOTE necklace.
Meredith Koop, Obama’s stylist for the last decade, told CNN the necklace wasn’t just part of Obama’s outfit — it was the impetus for her entire look.
“I built all of the outfit options I offered to Obama around the necklace. When I commissioned it, I knew it had to be the centerpiece,” Koop said. She admitted she was mildly worried Obama might find the necklace too obvious, but the former first lady liked the idea of the lettering. “When the speech started, you had to squint a little to read it. I love that. It pulled the viewer in.”
Obama’s necklace was crafted the day after Koop direct-messaged Cuthbert on Instagram, out of the blue, in late July. The two had never previously met, nor had they worked together, yet Koop had taken note of Cuthbert’s designs on social media. Cuthbert had made a limited supply of VOTE necklaces for herself and friends in 2016, and in 2018 to raise awareness about the primaries, and she intended to do so again in anticipation of 2020’s presidential election. The timing of Koop’s request was fortuitous.
“I try to keep politics and business separate,” Cuthbert saud, “but in these times, with what’s happening in the world, I felt like I needed to use my platform. So when Meredith reached out we knew how important it was to do this, and do it now.”
Cuthbert is in her mid-30s, Black and one of millions of small business owners and entrepreneurs following their passions, and waiting for a big break, for which she is now ready.
“I reached out to friends in the jewelry industry last night and this morning and have just said, ‘Um, I’m going to need some help,’ in the best possible sense,” says Cuthbert. “This is it. This is the dream come true.”

Cuthbert had no idea if or when Obama would actually wear the piece, so seeing her VOTE message so clearly spelled out in front of millions of viewers Monday night came as a happy surprise. Cuthbert said she was pleasantly shocked to see Obama was also wearing a pair of BYCHARI thin, gold hoop earrings, which she says are also selling at a faster clip since Obama’s appearance.
For Koop, who sources and helps select most of the outfits Obama wears for public events, picking BYCHARI was no accident. Koop has long been a champion of Obama’s own, consistent fashion ethos: uplifting brands and designers whose products and stories go beyond merely a retail or sales objective.
“I vet all the designers that I work with to the best of my ability. It’s important that the pieces on Michelle align with her message or, at the very least, don’t distract from it,” Koop tells CNN.
For Obama, and, thus, Koop, there must be meaning behind the clothes and accessories — an organic but very present melding of politics and culture. From her earliest days in the White House, Obama noted the importance of her global platform from not only a policy standpoint, but also a sartorial one. Observers were, by nature of the role, going to pay attention to what Obama wore, so the former first lady shifted to make decisions about her wardrobe that were influenced by a greater motivation than just what she liked.
Obama has continued to use her recognition and her style of politics in her post-White House years, perhaps with more fashion flair than when she was constrained by the bounds of being first lady. Koop, for Obama’s “Becoming” book tour, dressed her in bold fabrics, slightly more revealing necklines and footwear with way more moxie (the thigh-high, shimmery gold Balenciaga boots for her New York City appearance, for example).
Cuthbert has felt the need to go beyond aesthetics for her business, too.
“Finding ways to give back has always been part of my brand identity,” she told CNN. “Initially, I was personally just trying to do my part and spread the word, but more recently, when people started posting support for Black-owned businesses, it was all I could do to thank them and try to do what I can.”
The BYCHARI website includes a category titled, “How You Can Help,” and clicking it opens a page with links to support various social justice causes, either monetarily or via signing petitions. The company’s stated philosophy atop the page aligns to a tee with the sentiments vocalized by Obama in recent months and in her DNC speech — a call to act, to discuss, to listen and to vote. Cuthbert’s business includes a link to register to vote on its site.
In the Netflix documentary of her memoir, “Becoming,” Obama talks about “turning fashion into a tool,” one that could promote a broad range of diverse, emerging and established designers, such as Tracy Reese, Naeem Khan, Jason Wu, Brandon Maxwell, Thom Browne, Rodarte, Cushnie et Ochs, Derek Lam and many others — now including Cuthbert.
Koop noted that when a designer benefits from the exposure, it’s a bonus.
“That’s the beautiful thing about what I do,” Koop said. “It doesn’t happen every time, but when it does, I’m thrilled, especially with someone like Chari who has worked so hard and makes beautiful wearable pieces.”