Blistering widespread heat continues across the western half of the country on Monday while attention is also focused as the week begins on tropical activity over the Atlantic.

Excessive heat warnings and watches have been issued from the West Coast inland to Arizona, Utah and Montana.

Temperatures in California will reach 110 degrees or more from inland southern California north to Sacramento on Monday. Phoenix will reach near record-breaking highs as temperatures again approach 115 degrees.

CALIFORNIA’S DEATH VALLEY HITS 130 DEGREES, COULD BE AMONG HOTTEST EVER

The record heat across the West over the weekend, including in Death Valley, which recorded 130 degrees on Sunday, carries into this week with little to no relief in sight for most through the end of the week. 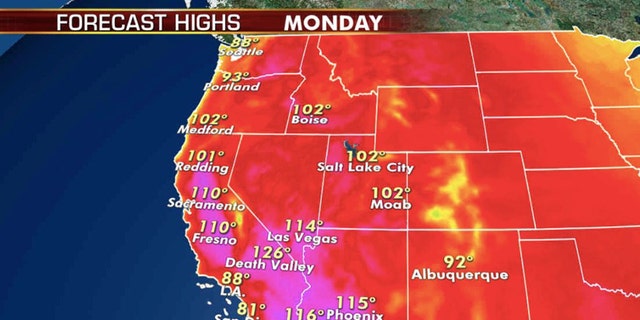 Temperatures will ease slightly across the Northwest by late week, but the Southwest will remain well above average.

Besides the heat, widespread storms with abundant lightning from eastern California and Nevada northeastward to Montana are expected to ignite more wildfires on Monday.

Extreme heat and dry conditions have allowed wildfires to quickly spread in the region.

Final advisories were issued on both Josephine and Kyle in the Atlantic over the weekend, but now attention turns to multiple tropical waves in the Central Atlantic and off the coast of Africa.

The two tropical waves are moving across the Atlantic Ocean on Monday.

Two tropical wave are being monitored for possible development over the Atlantic Ocean. (Fox News)

The nearest is a fast-moving wave located a couple of hundred miles east of the windward islands that continue to produce disorganized shower and thunderstorm activity. The system has a 50% chance of turning into a named tropical storm in the next five days.

This system will move into the Caribbean by midweek and will have a better opportunity to organize and become a more significant storm by the end of the week.

While still far out, this system could eventually affect the Gulf Coast.

The busiest stretch of hurricane season is from late August to early October. (Fox News)

These two tropical storms will have the opportunity later this week to develop as we head into the historically most active two months of hurricane season.

Meanwhile, in the East Pacific, off the coast of Mexico, Tropical Storm Genevieve is rapidly intensifying and is expected to become a hurricane later today, then a major hurricane on Tuesday.