Amid fears of a second wave of the coronavirus outbreak in Europe, hundreds gathered Sunday in the Spanish capital of Madrid and Belgian capital of Brussels in protest against the mandatory wearing of masks and other restrictions imposed in both countries to help curb the spread of the virus.

Both protests followed a four-day streak of rising daily new cases from August 11 to 14 across Europe, which has more than 3.7 million confirmed cases. Weekly new cases in the region increased for four consecutive weeks from the week commencing July 13 to the week starting August 3, according to the latest report Sunday by the World Health Organization.

The demonstrations are the latest in a string of anti-mask and anti-lockdown protests reported this month in Europe, including in the U.K. and Germany, with growing anti-mask sentiment reported in France.

Hundreds of Spaniards clapping and chanting “freedom” rallied at Madrid’s Plaza de Colón on Sunday, holding signs that read “The virus does not exist” and “Masks kill” and “We are not afraid,” Agence France-Presse (AFP) reported.

Meanwhile in Brussels a crowd of more than 200 people gathered Sunday in a protest against masks and other measures, with demonstrators holding signs that read “Corona circus” and “It’s my body, it’s my choice,” F.R./AFP reported.

The protest in Spain came two days after new restrictions were announced in the country, including nightclub closures and a ban on smoking in public spaces when it is not possible to keep at least two meters (around 6.5 feet) from other people.

Many of the protesters in Madrid were seen without masks, which are currently required to be worn in public spaces across the country.

One protester in Madrid, 58-year-old Pilar Martin from the northeastern city of Zaragoza, claimed governments around the world were exaggerating the number of infections to curb people’s freedoms.

Martin told AFP: “They are forcing us to use a mask, they want us to stay home practically locked up. It’s obvious that they are continuously tricking us with talk of outbreaks. It’s all a lie.”

Some demonstrators in Brussels were also reported to be without masks, which have been required in the Brussels region from August 12. The country paused all further reopenings last month, with mask mandates issued for all customers who aren’t seated at bars and restaurants.

One man at the protest in Brussels was reportedly wearing an orange life jacket with a sign that read “Ready for the second wave,” while another protester wore a t-shirt that read “No to this masquerade,” F.R./AFP reported. 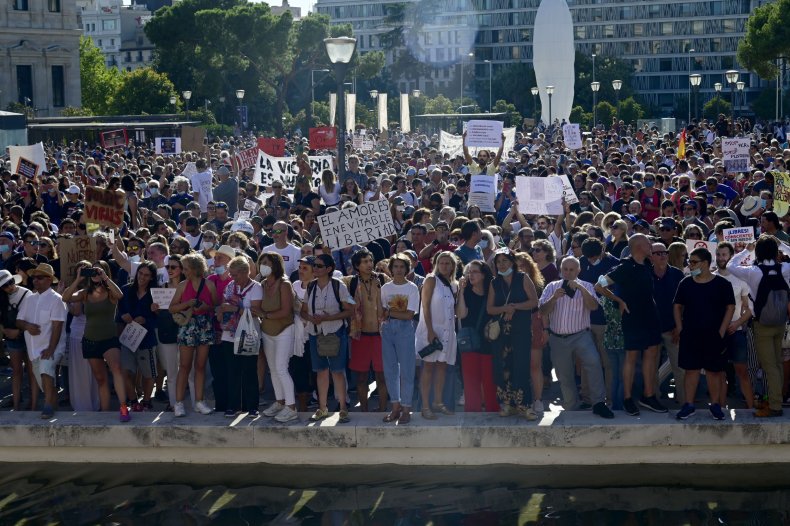 People in Madrid, Spain at a demonstration against the mandatory use of face masks and other safety measures issued by the Spanish government, pictured on August 16, 2020. Getty Images

The call for the protest in Brussels, which began days earlier on social media, was accompanied by a call for the resignation of Belgian virologist epidemiologist Marc Van Ranst, the head of the COVID-19 testing lab at Leuven University (the national reference laboratory for the virus), who is among the country’s health experts advising the government on the outbreak.

Around mid-July, Van Ranst told Belgium’s Radio 1 network: “With the latest numbers and the recent increases of confirmed cases, you can clearly see that we are at the start of a second wave,” following a 32 percent increase in weekly cases at the time, Reuters reported.

One woman at Sunday’s protest reportedly told Belgium’s RTBF television channel: “The goal (of the virus) is vaccination and virologists who appear on television receive small envelopes from pharmaceutical laboratories, as we know.”

Earlier this month in central London, crowds of demonstrators joined an “anti mask march,” with several holding signs that read: “Stop the new normal, save lives,” “Freedom over fear,” and “Masks are muzzles,” as they marched toward Downing Street, the location of the official residence of British Prime Minister Boris Johnson.

The Anti-Mask March went from an earlier rally at Marble Arch which then progressed down through Oxford Street left at Regent Street then proceeded towards the BBC centre #KBF pic.twitter.com/wZRq0ekqqb

One protester in London told Ruptly: “I’m concerned about where the country is going in terms of mandatory face masks use. Now, this is my body, I used to be a nurse, a mental health nurse, and one of the things we learnt as mental health nurse students is that it is considered battery to forcibly put something on a person’s body without their consent.”

Earlier this month, around 20,000 people across Germany gathered in the German capital of Berlin in a protest against measures imposed by the government, which included domestic travel restrictions and mandatory masks at all times for children in some parts of Europe upon their return to school later this month.

People were reported to be chanting “We’re the second wave” and “resistance,” outside the city’s Brandenburg Gate monument, Germany’s Deutsche Welle (DW) reported.

Anti-mask sentiment was reported to be growing in France, with some people said to be boycotting certain stores or refusing to go into shops where they’ve been asked to wear a mask, according to locals, Radio France Internationale (RFI) reported.

“Some are boycotting certain shops or they refuse to go into shops where they’ve been asked to wear a mask”, one French local told France Info.

A resident of Le Mans of northwest France told France Info: “It’s designed to create panic, to get everyone to vaccinate themselves.”

Over 21.6 million people across the globe have been infected since the virus was first reported in Wuhan, China, including more than 5.4 million in the U.S. Over 13.6 million have reportedly recovered from infection, while more than 775,200 have died, according to the latest report Monday by Johns Hopkins University.

The graphic below, provided by Statista, illustrates countries with the most COVID-19 cases.

The graphic below, provided by Statista, illustrates a comparison of average new cases in the U.S. and the European Union.

The average number of newly confirmed COVID-19 cases in the U.S. and European Union. STATISTA