Postmaster General Louis DeJoy on Monday agreed to testify before a House panel next week, but only after Tennessee Democratic Congressman Jim Cooper threatened to have him arrested.

Cooper on Saturday joined dozens of voices on Capitol Hill including House Speaker Nancy Pelosi who demanded the head of the United States Postal Service respond to recent claims the USPS is meddling in the upcoming election process. The postmaster is now set to appear before the “urgent” House Oversight panel on August 24. Colorado Secretary of State Jena Griswold on Monday also threatened legal action against DeJoy, issuing a statement accusing the postal service and president of potentially colluding to “suppress voters.”

Over the weekend, Cooper floated having the House Sergeant at Arms arrest the head of the postal service if he failed to testify before Congress. President Donald Trump has been accused of attempting to slow up postal deliveries as a means of derailing mail-in voting ahead of this November’s elections.

We need to subpoena the Postmaster General, and if he fails to appear, we should send the Sgt at Arms to arrest him.

“We need to subpoena the Postmaster General, and if he fails to appear, we should send the Sgt at Arms to arrest him,” Cooper, who is on the Oversight panel, tweeted Saturday. “It’s not just ballots that are being slowed. It’s life-saving medication and checks for our veterans and our elderly. Tampering with the mail is a federal crime, and DeJoy — on Trump’s orders — is tampering.”

“Over the past several weeks, there have been startling new revelations about the scope and gravity of operational changes you are implementing at hundreds of postal facilities without consulting adequately with Congress, the Postal Regulatory Commission, or the Board of Governors,” House Oversight Chair Carolyn Maloney, a New York Democrat, wrote to DeJoy Sunday.

DeJoy is a major Republican Party fundraiser and is a former deputy finance chairman of the Republican National Committee. 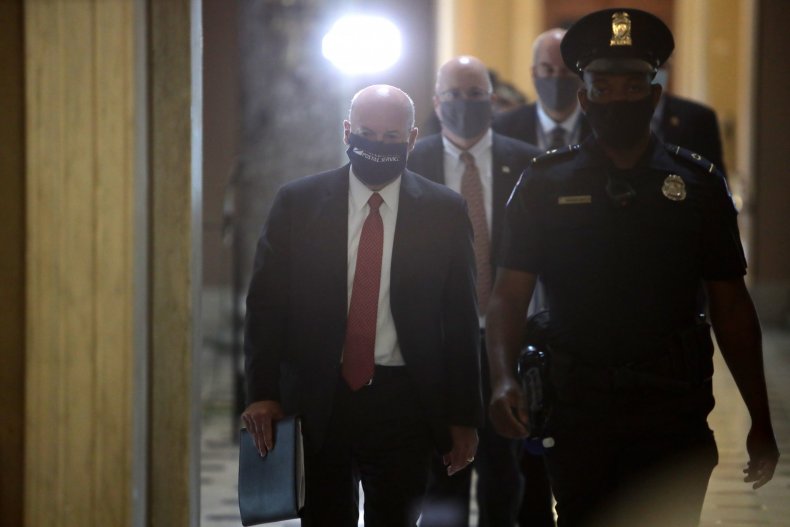 Postmaster General Louis DeJoy agreed to testify before a House panel next week, but only after several top Democrats including Tennessee Congressman Jim Cooper threatened to have him arrested. ALEX WONG / Staff/Getty Images