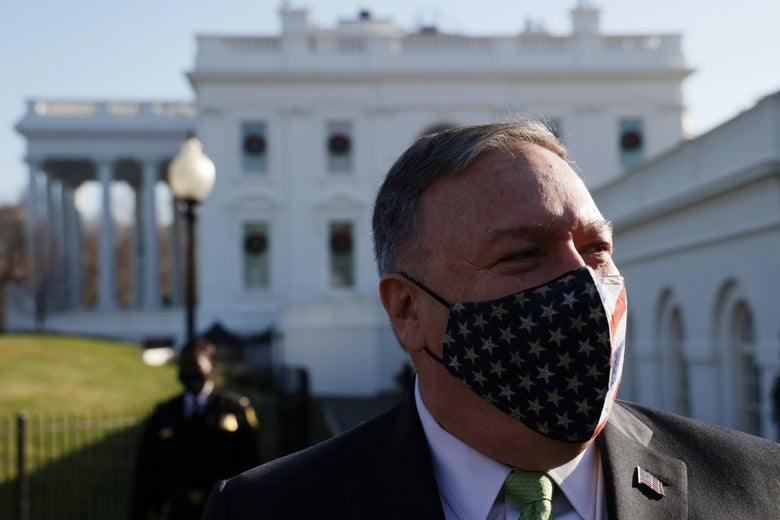 Shortly after the election, Secretary of State Mike Pompeo sent much of the country spiraling by saying his department was preparing for a “smooth transition to a second Trump administration.” Pompeo may have been joking, and it doesn’t appear that that second term is going to happen. Instead, the secretary of state’s tenure came to an ignominious end this week when Luxembourg’s foreign minister and several top EU officials declined to meet with him, prompting Pompeo to cancel a planned trip to Europe.

But Pompeo, Middle East envoy Jared Kushner, and the rest of the Trump foreign policy team have been busy in recent weeks, seemingly trying to cram a full four-year term’s worth of foreign policy actions into the two-month transition period.

Here are a few of the most significant actions they’ve taken since learning they lost the election:

Nov. 10: The administration formally notifies Congress of a planned $23 billion arms sale to the United Arab Emirates, including F-35 stealth fighters. The deal, which came after the UAE normalized relations with Israel, survived a Senate challenge in December.

Nov. 12: Trump issues an executive order barring Americans from investing in companies linked to the Chinese military, one of a number of new sanctions on China that provoked retaliation from Beijing against U.S. firms this week.

A daily email update of the stories you need to read right now.

We encountered an issue signing you up. Please try again.
Please enable javascript to use form.

Thanks for signing up! You can manage your newsletter subscriptions at any time.

Nov. 16: The Pentagon announces plans to cut the number of U.S. troops in Afghanistan from 4,500 to 2,500, as well as a more modest troop reduction for Iraq. The administration is reportedly pressing ahead with the withdrawal in defiance of a law recently passed by Congress that bars a drawdown below 4,000 troops until the Defense Department completes an assessment of the risks and impacts of the withdrawal.

Nov. 18: The U.S. announces sweeping new sanctions targeting Iran as well as a foundation tied to Supreme Leader Ayatollah Ali Khamenei. The sanctions appear to be part of the Trump administration’s plan to ramp up its “maximum pressure” campaign against Iran in order to make it harder for Biden to return to the 2015 nuclear deal. Even more sanctions were added this week.

Nov. 19: Pompeo becomes the first U.S. secretary of state to visit the Israeli-occupied Golan Heights. In 2019, the Trump administration broke with most of the international community and decades of precedent by recognizing Israeli sovereignty over the territory, which was captured from Syria in 1967.

Dec. 10: The U.S. recognizes Moroccan sovereignty over Western Sahara, again defying most of the international community and international law, in exchange for Morocco normalizing relations with Israel.

Dec. 14: The State Department removes Sudan from its list of state sponsors of terrorism, in exchange for that country improving relations with Israel. Sudan, which once harbored Osama bin Laden, had been on the list since 1993, though is not believed to have supported terrorism recently.

Jan. 9: The U.S. eases restrictions on how its diplomats and officials can interact with Taiwan, which the U.S. does not formally recognize in accordance with the long-standing “One China” policy. U.S. Ambassador to the U.N. Kelly Craft was due to make a high-profile visit to the country this week until it was canceled after Pompeo’s Luxembourg snub.

Jan. 10: The State Department announces it is designating Yemen’s Iran-aligned Houthi rebels as a foreign terrorist organization. Aid groups fear that the blacklisting of the group, which controls Yemen’s capital and much of its territory, could hinder efforts to deliver humanitarian aid in the midst of the world’s worst ongoing famine.

Jan. 11: The administration announces it is returning Cuba to the list of state sponsors of terrorism. Cuba had previously been on the list for its support of left-wing rebel movements in Latin America, but was removed in 2015 as part of the Obama administration’s efforts to normalize diplomatic relations with the island.

Most of these moves were likely in the works or at least under consideration before the election. And it’s not unheard-of for presidents to make major precedent-setting foreign policy moves during transition periods. Bill Clinton signed the treaty establishing the International Criminal Court during his lame-duck period, a controversial agreement that has still never been ratified by Congress. George W. Bush signed an agreement with Iraq that effectively locked incoming President Barack Obama into a slower troop withdrawal timeline than the one he had campaigned on.

Still, it’s unusual for an outgoing administration to go full YOLO on foreign policy in its final months to quite this extent. Pompeo, who likely has future political plans of his own, seems to be working to burnish his legacy. He has been conspicuously silent on the chaos in Washington in recent weeks, while unleashing an endless stream of swagger and boasting on his Twitter account, culminating in a demand for a Nobel Peace Prize this week.

The Trump team’s last-ditch blitz also seems designed to create faits accomplis that will limit the ability of the Biden administration to undo Trump’s legacy. Will it work? In some cases, perhaps. Whether the U.S. will actually be able to return to the Iran deal in anything resembling its original form is still an open question. And it will be politically awkward, at least, for Biden to reverse the Trump positions on Western Sahara and the Golan Heights.

But for the most part, these are moves that can be reversed by the Biden administration if it wants to. The long-term damage this kind of partisan grandstanding and flip-flopping does to U.S. credibility is a bigger concern.