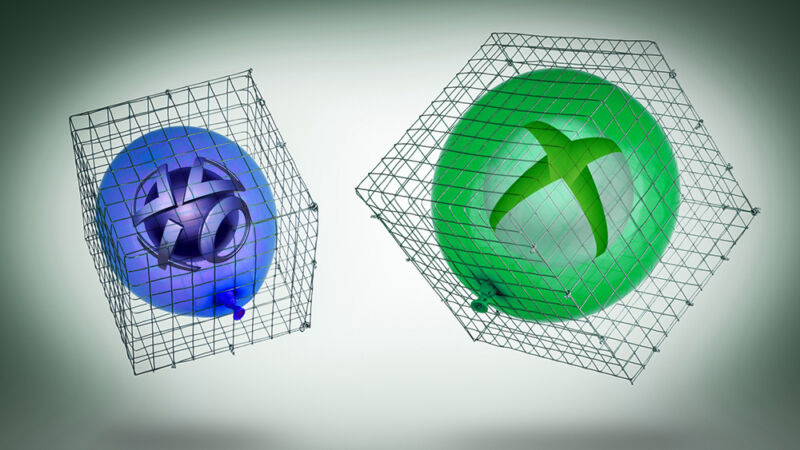 Then, when Fortnite was predictably removed from both platforms, Epic filed lawsuits against both companies, alleging “anti-competitive restraints and monopolistic practices” in the mobile app marketplace. That move came alongside a heavy-handed PR blitz, including a video asking players to “join the fight to stop 2020 from becoming ‘1984.’”

But through this entire public fight for “open mobile platforms,” as Epic puts it, there is one major set of closed platforms that the company seems happy to continue doing business with. We’re speaking, of course, about video game consoles.

Most if not all of the complaints Epic makes against Apple and Google seem to apply to Microsoft, Sony, and Nintendo in the console space as well. All three console makers also take a 30-percent cut of all microtransaction sales on their platforms, for example.

This DLC fee represents a big chunk of those console makers’ revenues, too. “Add-on content” was a full 41 percent of Sony’s Game and Network revenue in the latest completed fiscal quarter. Microsoft saw a 39-percent increase in gaming revenue the quarter after Fortnite was released, too, coyly attributing the bump to “third-party title strength.” And the Switch saw similar post-Fortnite digital revenue increases after Nintendo announced that fully half of all Switch owners had downloaded Fortnite.

Enlarge / Even though consoles charge a 30-percent fee for all game DLC, Epic still offered console players a discount that it said necessitated “Direct Payments” on mobile platforms.
Epic Games

On mobile platforms, Epic is calling the same kind of 30-percent fee “exorbitant” and says it wants to offer a more direct payment solution so it can “pass along the savings to players.” On consoles, though, Epic happily introduced a permanent 20-percent discount on all microtransaction purchases, despite there being no sign that the console makers have changed their fee structure.

A brief history of console control

The major console makers also all exercise full control over what games and apps can appear in their own walled gardens. When it comes to iOS, Epic says that “by blocking consumer choice in software installation, Apple has created a problem so they can profit from the solution.” When it comes to consoles, Epic is silent about the same state of affairs.

In this sense, consoles are even more restrictive than Android, where games and apps (including Fortnite) can be sideloaded without using the Google Play Store. Yet Google has earned a lawsuit for its role in this state of affairs, while the console makers have remained undisturbed.

In addition to the business implications, console makers’ total control of their marketplaces also has a direct impact on the types of content that players get to play. Any game that receives an Adults Only rating from the ESRB isn’t welcome on any of the three major consoles, for instance. And if you want to use UWP to code an N64 emulator that works on the Xbox One, Microsoft will pull it down as quickly as it can.

It wasn’t always this way, of course. Back in the days of the Atari 2600, anyone with the programming skill and cartridge manufacturing capacity could make games for the console. That state of affairs led to a glut of poorly made Atari software flooding the market, a situation many observers blame for the video game industry crash of 1983.

Without full control over their software, console makers fear another glut like the kind that led to excess Atari cartridges being buried in a New Mexico desert.
Megan Geuss

To prevent history from repeating itself, Nintendo created a lockout chip for the NES that gave it effective control over what cartridges could run on its hardware (and gave it the capability to extract a licensing fee from game developers for the privilege of producing cartridges). When companies like Tengen tried to get around this restriction, Nintendo took them to court and won, cementing its right to Apple-style control of its own software marketplace.

Decades later, this kind of absolute control over compatible software is treated as the de facto standard in the console space. But in the world of mobile phones, companies like Epic are increasingly and publicly lambasting similar restrictions as anti-competitive monopolistic practices. What’s the difference?

Some might argue that software restrictions on consoles are less impactful because the hardware is only designed to play games. As Epic puts it in its own FAQ, “mobile devices are essential computing devices upon which we conduct our social and professional lives and engage in commerce and entertainment.” That FAQ compares the mobile marketplace only to “other general-purpose computing platforms, including Web, Windows, and Mac.” Consoles don’t fit in that same “general purpose” framework, it seems.

But that’s an increasingly outdated view of what consoles can do. The Xbox One, to cite just one example, includes a a wide-ranging selection of non-game apps for functions like video on demand, music streaming, VoIP, email, and more. That might not put it on the same tier of software selection as a smartphone, but it does push it ever closer to the “general-purpose computer” space.

Some might point to the very different nature of the revenue model for the different ecosystems. While Apple makes a significant profit on every iPhone sale, console makers routinely sell their hardware at a loss or at nearly no profit to increase the user base for future software licensing and sales.

That might help explain why console makers feel the need to guard their 30-percent cut on software and microtransaction sales. But it doesn’t really explain why a company like Epic would be OK with paying that fee to Sony but not to Apple.

[Update: Epic’s Tim Sweeney did indeed gesture a bit toward this explanation in 2018, telling GamesIndustry.biz that “there’s a rationale for [the 30-percent fee] on console where there’s enormous investment in hardware, often sold below cost, and marketing campaigns in broad partnership with publishers. But on open platforms, 30 percent is disproportionate to the cost of the services these stores perform, such as payment processing, download bandwidth, and customer service.” Thank to Christopher Dring for pointing this out.]

Maybe Epic is simply more worried about the potential for lost revenues on consoles versus mobile platforms. A mid-2019 Newzoo study of three major Battle Royale games, including Fortnite, found that 71 percent of players mainly played on consoles, compared to just 17 percent on PC and 12 percent on mobile. Being cut off from those console players during a heated public battle would be a much more significant blow to the game’s revenue stream.

Or maybe Epic just has a better relationship with console makers than mobile phone makers. Epic has long made console the main focus of its Unreal Engine development, after all, in a way that has been less true for mobile phones.

Sony recently invested $250 million in Epic and prominently featured Epic’s Unreal Engine 5 in a recent major PlayStation 5 promotional demo, too. Even Nintendo, which traditionally uses its own technology for game development, has begun using Unreal Engine for its own titles in recent years. In a way, Epic can’t attack these platform holders without also attacking itself.

Sony and Epic were practically holding hands and skipping together for this rollout of Unreal Engine 5 on the PlayStation 5 in May.

And while Epic and Microsoft famously sparred over the Universal Windows Platform on PCs, the two companies publicly buried the hatchet last year during the rollout of the HoloLens 2 platform. “Epic loves Microsoft,” Tim Sweeney said at the time. “Epic hearts Microsoft.”

Apple and Epic aren’t exactly strangers in the world of business, though. Epic’s Infinity Blade and Unreal Engine were featured in an iPhone keynote presentation back in 2010, for instance, and the company unveiled a “Zen Garden” demo for iOS 8 at WWDC 2014. But while Unreal Engine is a key part of the console landscape these days, the high-end 3D graphics it enables are still more of a niche on mobile platforms, which are often underpowered for those kinds of games.

Perhaps the answer is that Apple in particular is just a riper target these days. Everyone from Microsoft and Google to email app makers to European regulators are taking aim at the anti-competitive nature of the iOS marketplace in recent months. Perhaps Epic doesn’t want to be the only company taking on the console triumvirate in the same way.

With Epic yet to respond to our requests for comment, we’re left guessing at why consoles have been spared from the company’s legal and PR wrath. But in the end, it may just be a question of timing. Maybe Epic is merely focusing on mobile marketplaces first, hoping to set a precedent that can also break the monopoly control console makers hold over their own hardware.

These days, it’s tough to imagine a world where console makers don’t get to approve the software that runs on their systems. But if Epic is successful in its attacks on the mobile phone realm, that could be where we’re headed.